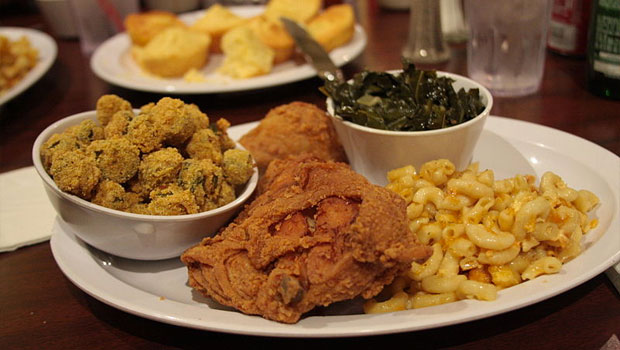 The United States gets a bad rap for its unhealthy eating habits, but there is so much more to eating in the U.S. than fast food. Local food and farmers’ markets provide plenty of opportunities to eat healthy, and the cultural melting pot of cuisines available in the United States means there is also plenty of variety. And don’t forget about regional and local favorites when you work and travel in the U.S, like those included on this list of America’s 50 Greatest Foods from CNN.

Thanksgiving is one of the biggest in the United States, but it also is a day we give thanks for friends, family and lots of delicious food. Turkey is the main course, but sometimes the best part of Thanksgiving is the side dishes like stuffing, mashed potatoes, green beans, cranberry sauce and pumpkin pie.

Christmas rolls around only a month after Thanksgiving and, along with it, more food is served and enjoyed. There is a reason gym memberships spike during January and the time of New Years’ resolutions!

Other holidays and cultural celebrations allow Americans to enjoy meals that they may not eat on a normal basis. A Seder is a Passover celebration involving food and religious rituals. On Christmas Eve, the traditional Feast of the 7 Fishes is popular in Italian-American households. You might find Irish-American families eating corned beef and cabbage on St. Patrick’s Day (even though it’s not a traditional meal back in Ireland), while others may try lutefisk during a Scandinavian holiday in the Midwest! And one of the well-known American traditions is hot dogs and hamburgers at a barbecue on the Fourth of July.

Our Cultural Compass guide to the United States shares information on where to find the nearest farmers’ market in your state. A farmers’ market is a community event, often held year-round but sometimes only in spring, summer or fall, that brings farmers, food producers, artisans and other vendors to the public. Shoppers will find fresh fruits and vegetables and often items like baked goods, jams, flowers and homemade goods. Farmers’ markets allow you to eat seasonal produce while supporting local vendors and to participate in a fun community event.

The Food section of the Cultural Compass guide also includes information on food festivals and the local cuisine of a state or region. Try out regional favorites like a pastrami sandwich in New York City, deep-dish pizza in Chicago, Tex-Mex cuisine in the Southwest or a lobster roll in New England.

Fast food is often associated with the United States, unfortunately, but popular fast food items like pizza, hot dogs, burgers, tacos and other convenience foods can be a fun treat every once and a while. Everything in moderation, guys. Healthier options are becoming more commonplace at fast food restaurants and stores too, such as salads, yogurt, granola and even apple slices as an alternative to French fries.

Chains like McDonalds and Burger King are some of the better-known food chains in the U.S., but there are also local favorites like In-N-Out Burger in California and Ray’s Famous Pizza in New York City (not to mention the many other favorite pizza places in NYC). And don’t forget food trucks when you’re in a major city – many food trucks serve up dishes that are anything but greasy fast food! Menus can be tricky sometimes but helpful apps can assist you in translating them into a different language.

Food Resources in the U.S.

Check out these resources for finding the best food in the U.S., including cooking blogs, information on eating out, and local cuisines in the United States:

Eating Out on a Budget