Need to Get Away for the Weekend? Top 10 Scenic Drives in the U.S.

Take advantage of your time here in the United States by taking a scenic drive!  Sometimes the journey itself can be just as enjoyable as the destination. Here is a list of 10 routes that display the natural beauty found in the U.S.  Happy Trails! 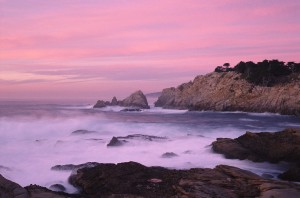 1. Pacific Coast Highway (Highway 1), California:  One of the U.S.'s most beautiful and iconic roads, this coastal drive provides scenic views of the Pacific Ocean. The 332 miles from San Francisco all the way south to Santa Barbara overlook gorgeous beaches on one-side, and stunning trees, redwoods inparticular, and greenery inland.

2. Blue Ridge Parkway, Virginia and North Carolina: This parkway has been referred to as "America's Favorite Drive." You will drive through miles of breathtaking scenery and plenty of National Park to explore. The parkway extends 469 miles along the southern Appalachian Mountains and connects Shenandoah National Park in Virginia with North Carolina's Great Smoky Mountains. Go in May for the wildflowers, but consider the fall season to catch a glimpse of the beautiful foliage.

3. Route 66, the American Heartland: The initial section of this iconic U.S. route is 300 miles from Chicago, Illinois to St. Louis, Missouri. Much of the historic landmark road exists today only in scattered sections that parallel the interstate. Still, this culturally and historically famous U.S. road (featured in American literature, music and television) represents the ideas of freedom and western migration in the American heartland. There are tons of roadside stops and attractions including eccentric drive-in restaurants.

4. Overseas Highway (Highway 1), Key West, Florida: 110 miles of beautiful island hopping—what else could you ask for? This scenic drive through the Florida Keys has picturesque views of turquoise waters and lush green. It takes you along a total of 42 bridges over the Atlantic Ocean, Florida Bay and the Gulf of Mexico.

5.Highway 12, Southern Utah: This 122-mile route through the southwestern region of Utah is breathtaking. From Torrey, Utah to Bryce Canyon National Park, passing through the Grand Staircase-Escalante National Monument and over Boulder Mountain and the Dixie National Forest, you have the opportunity to take in the unforgettable scenery, not to mention from 9,000 feet high!

6. Route 6A – Cape Cod, Massachusetts:  Stretching 34 miles through the hook of Cape Cod (the easternmost portion and peninsula of Massachusetts), you're sure to experience what makes locals and tourists alike fall in love with the Cape. Breathe in the saltwater air and take in the views of the surrounding marshes, blue inlets and beaches as you drive through quaint towns like Yarmouth, Dennis, Orleans and Truro and end up in Provincetown, a beautiful beach town on the furthest tip of Cape Cod. 6A is easily one of the best coastal New England road trips.

8. Million Dollar Highway-Western Colorado:  This 25-mile stretch of highway is a beautiful journey through the mountainous regions of western Colorado.   The highway follows the route of U.S. Route 550 between Silverton and Ouray, Colorado and presents stunning views over three mountain passes. The origin of the name Million Dollar Highway is disputed and there are several legends.  Some say that it cost a million dollars per mile to build in the 1920s, and another says that the road's dirt fill contains a million dollars in gold ore.

9. State Route 179-Red Rock Scenic Byway, Arizona: This road is known as "a destination unto itself." The byway winds along the prehistoric and strikingly beautiful Red Rock Country of Sedona, Arizona and meanders through the Coconino National Forest. Sedona and the surrounding area has become an increasingly popular place to visit in the U.S. due to the stunning scenery of the Red Rocks. Biking and hiking is encouraged to explore the incredible vistas.

10. Route 100, Vermont Ski Country: This road runs straight up the length of the state of Vermont. Whether in the fall for the foliage, or during the winter for ski season, this route will certainly impress those looking for spectacular New England mountain views. Route 100 is in fact the main route for the most popular Vermont ski and resort towns, including Mount Snow, Killington, Sugarbush, Stow Mountain Resort and Jay Peak.