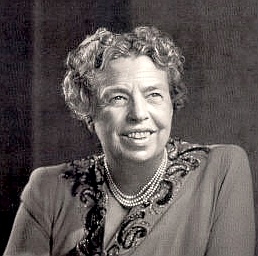 Anna Eleanor Roosevelt was the First Lady of the United States from 1933 to 1945. While her husband, Franklin Delano Roosevelt (known as FDR), served as the 32nd President of the United States, she was a prominent speaker, activist, politician and author. Eleanor is especially known for her international human rights efforts.

Eleanor was a very active First Lady, traveling all over the country and giving press conferences, as well as lectures and radio broadcasts. Eleanor maintained a demanding speaking schedule and wrote magazine and newspaper columns, mostly directed toward women. In them she discussed social issues such as taking care of children, improving working conditions, and her husband's political agenda, which she believed would improve the lives of Americans. She had an important media presence where she reached women all over the country. She was not afraid to express her thoughts and even had her own daily newspaper column titled "My Day." She would respond publically to letters written to her and gave women a voice. She communicated with citizens in a way no former first lady had ever done. Since she was candid in her opinions, she was often used as a political target. At the end of the day, she was loyal to her beliefs, and many people admired her.

Eleanor Roosevelt was born in New York City on October 11, 1884 to Anna Hall and Elliott Roosevelt. Her father was the younger brother of Theodore Roosevelt, the 26th President of the United States, so she was raised in a wealthy, high society family. Her mother died in 1892 when Eleanor was eight, and her father died only two years later.

After her parents' death, Eleanor went to live with her maternal grandmother, and was sent to a girls' boarding and finishing school in England. After completing her proper education abroad, she returned to the U.S. and became involved in volunteer work. She also joined and became active in the New York Junior League, where she was able to help out in the local community. Eleanor spent a lot of time as a volunteer social worker in New York City's east side slums. This experience inspired her later volunteer work and community outreach efforts in the White House and abroad.

In 1902 Eleanor met her future husband, Franklin Delano Roosevelt, and they were engaged in November 1904. They were in similar social circles so they met through mutual friends. Interestingly enough, FDR was also a distant cousin of Eleanor's. They were married in 1905 and Eleanor's uncle, the President, gave her away at the wedding. She had six children in 11 years, although one son died as an infant.

As her husband became more active in politics, Eleanor, too, became more politically involved. Drawing on her volunteer experience, she took on an increased interest in civil rights, social concerns and labor issues. Franklin served in the New York State Senate from 1910 to 1913. While in Albany with her husband, Eleanor became active in the women's division of the State Democratic Committee.

While on vacation in 1921, FDR contracted what was later diagnosed as polio, which caused paralysis. While he was ill, Eleanor stood in for him at numerous engagements and made appearances on his behalf, at a time where it was very uncommon for women to represent their husbands in the public sphere.

Following a successful campaign, FDR became governor in 1928 and later served as Assistant Secretary of the Navy in Washington, D.C. Eleanor next joined her husband in the White House in 1933 when he became President of the United States

Eleanor did not want to have a purely ceremonial role as first lady, so it was important to her to be involved. She had seen the traditional and limited role her aunt, Edith Roosevelt, played as first lady, so she was determined to put her skills to use. While Eleanor neither drafted legislation nor held elective office, she worked with other reformers within the administration to shape and influence policies and programs, particularly the New Deal, a series of economic programs implemented by her husband's administration.

In an effort to improve relations with other countries, Eleanor spent a great deal of the 1940s traveling internationally. She supported opportunities for African-Americans and women and promoted human rights initiatives in other countries. Even after her husband's death in 1945, Eleanor maintained a busy career and was active in politics. Throughout the 1950s, Eleanor carried out countless national and international speaking engagements, continued writing her column, and made appearances on television and radio broadcasts.

In 1945 U.S. President Harry Truman appointed her as a delegate to the United Nations General Assembly. She then became the first chairperson of the preliminary United Nations Council on Human Rights in 1946 and had a prominent role in the drafting and execution of the Universal Declaration of Human Rights. The Declaration, which she had an enormous part in creating and supporting, was adopted by the General Assembly on December 10, 1948.  It is the primary document used today in upholding the rights that all human beings hold. From 1945 to 1953 (and again in 1961) she served as a UN delegate.

Eleanor Roosevelt was one of the most beloved women of her generation and is still revered today for her work. Her generous spirit and dedication to human rights earned her the respect of the country and of the world. She truly transformed the role of the First Lady in the United States.