CrossFit is a physical fitness lifestyle created by California native, Greg Glassman decades ago. It sprung up from a single gym in Santa Cruz and a simple blog and has now become a network of over 5,500 affiliated gyms across the world at which there are over 35,000 accredited CrossFit Level 1 Trainers. Its continuously varied functional movements done at relatively high intensity characterize the regimen. These exercises are usually performed in one room with multiple people so that there is a sense of community within the CrossFit world. Glassman's CrossFit equation is the following: CVFM @HI + Communal Environment = Health of which "a regiment of constantly varied (CV), functional movements (FM) performed at high intensity (@HI) in a communal environment leads to health and fitness. 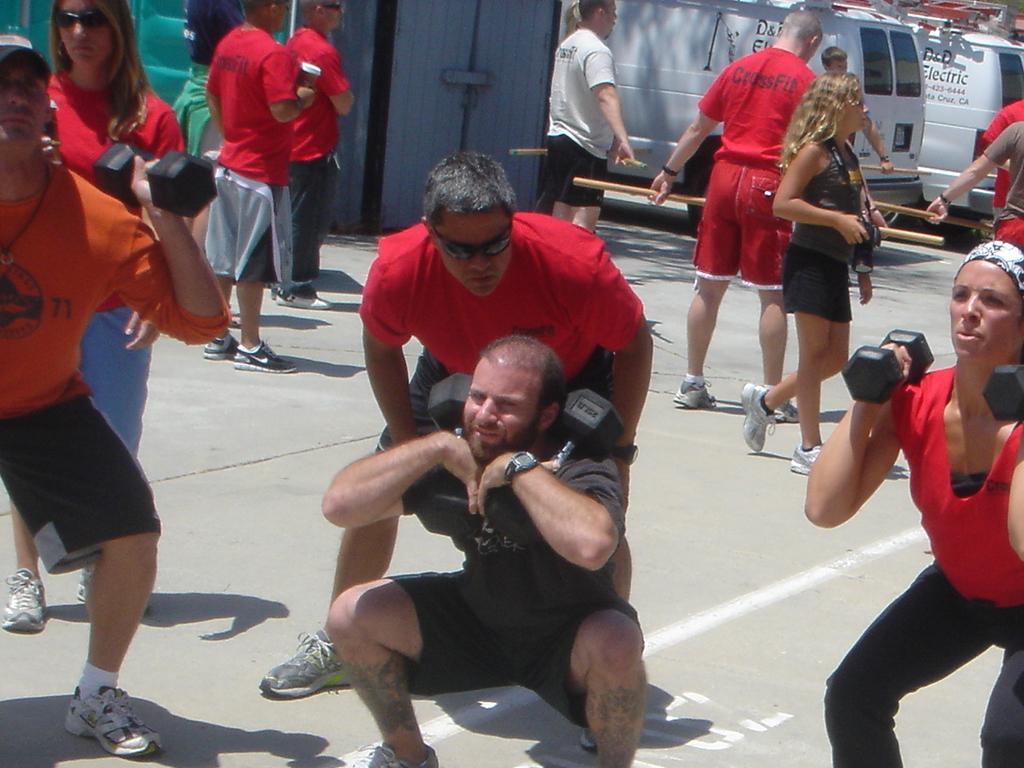 There is an entire list of CrossFit exercises that you can try out as long as you have Internet access and QuickTime Player installed. A Workout of the Day (WOD) is usually posted on the CrossFit site. CrossFitters typically train in one of the two forms: 3 days on/1 off, or 5 days on/2 off. Some of the exercises are modeled after the Olympic games, since much of the exercise equipment utilized is used in the Olympics. These include kettlebells, wall-balls, climbing ropes, and rings. There are also workout sequences that are identified using female names, such as Cindy, which involves 5 Pull-ups, 10 Push-Ups, and 15 Squats done for as many rounds as possible in 20 minutes. There are also "Hero Workouts" named after military offers such as Nate (named after Chief Petty Officer Nate Hardy killed during service in Iraq), which involves 2 Muscle-ups, 4 Handstand Push-ups, 8 2-Pood Kettlebell swings done for as many rounds as possible in 20 minutes.

While training, one must ensure that they are maintaining a healthy, nutritional diet. CrossFitters usually adopt the Paleodiet, which is based on the premise that one should eat wholesome foods that only our hunter-gatherer ancestors consumed during the Paleolithic or Stone Age era. They usually abstain from sugar, legumes, and dairy products. Most of their diet consists of meats, vegetables, fruits and nuts. Some studies have shown improved health outcomes after adopting the Paleodiet compared to other diets. Unfortunately, it is known to be relatively costly. Regardless of whether or not a CrossFitter adopts the Paleodiet, it is important to eat healthy and be mindful of the foods that you are consuming.

The CrossFit Games, known as the world's most inclusive sporting event, launched in 2007 to discover the "Fittest on Earth". There are three stages: the Open, the Regional competitions, and the Games. In 2012, tens of thousands of people from 70 countries have participated in the Open stage, which is comprised of five workouts over five weeks. To advance to the Regional competitions, about 1,500 men and women would need to prove that they are the strongest athletes from the Open session.  The best challengers from the Regional Competitions would proceed to the final stage, the Games, which are hosted in Los Angeles, California every summer.

If you are interested in adopting the CrossFit regimen, you can start off with performing the workouts online and modifying your diet. There are gymnasiums nationwide that offer CrossFit programs, affiliated with CrossFit. You may also attend CrossFit Training Courses (The Level 1 Certificate Course and Coach's Prep Course) if interested.