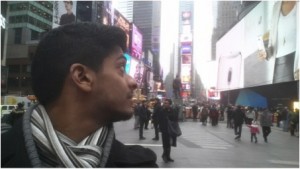 Guest blog post: Sebastian T., participant from the U.K., shares his experience of his first day in New York City

I knew that my first day in the city would be one of finding my feet and of the all-consuming task of flat hunting (despite my earlier claims, this is in fact not my flat, and I do need to move out by the start of January). That still didn't stop me lounging around the flat from 7am till 11am, though in my defence, some of that was spent on the flat hunt.

When I finally head out, I have a plan – get some cash out, take the tube subway to work, faff around Times Square like the tourist I am for a bit, then head out to one of the neighbourhoods that I'll potentially get a flat in to check it out. All of this, followed by buying some ingredients to cook for my new housemate (a friend of Aude's who I'm yet to meet at this point) as a reverse-welcome. Sounds pretty simple eh? Well I manage to make a meal out it nonetheless.

First – cash. In my infinite wisdom, I had previously thought to find out whether one could withdraw cash for free in NYC (i.e. without the ATM itself charging you) and had a couple of potential sites lined up – "I'm not going to be taken for a mug!" I thought. Sadly, as it now appeared, the majority of ATMs that claimed to be free online, were only so for customers of the respective bank – not a smug cardigan-wearing Brindian (British Indian). As I realise this, my self-righteous smile begins to waver as I start to accept the reality that I will indeed be 'taken for a mug'. A few ATMs later, and it really seems that my luck isn't going to be in. I have one last hope – a startup company, inventively called FreeATM, who began installing completely free-to-use ATMs around the city just 2 months ago. I arrive at the address of one of these ATMs, and…the shop is shut. Hard cheese. Well, nothing for it but to move on to step 2. 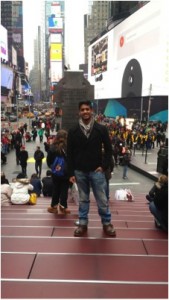 As I step off the subway at 34th Street (what a sensible street-naming system – well done, New York founders), I realise just how close I will be to the action when I start work – my offices are at 38th Street and 8th Avenue (again fantastic with the whole coordinate-esque system, New York), while Times Square is basically 42nd-47th Street and 7th Avenue. Excellent stuff. Walking to my place of work, I think to check the FreeATM website once more to see if there's one of their 25 FreeATMs in the area. Lo and behold, there is. Not quite daring to hope, I head up 39th Street expecting the worst, and, following the address on my phone, walk into a café of all things. This can't be right, I think to myself, but continue on anyway, seeking the Holy Grail – a free cash machine. As I enter the darker depths of the establishment, I see something – a light, a beacon of hope. As I approach it cautiously, looking furtively over my shoulder, lest it turn out to be a false promise and I have to make a reasonable excuse for wandering around the part of the café where no one else is, I allow myself to hope – could this be it? The symbol of all that is good in this world? By the light, it is. I collapse in hysterical sobs of joy, hugging the machine, holding it close, never wanting it to leave. Too far, you think? Not to a cheap frugal man like me. 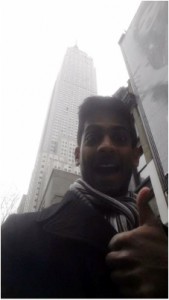 Questing done, I head towards Times Square (after taking a mandatory Empire State selfie). As I approach the din and ludicrously bright lights, the I feel the familiar buzz again. Finally, as I round the corner of 42nd Street, I see it in all its glory. The tourist hotspot of NYC, and a total nightmare to local New Yorkers no doubt. But hey, I'm still in tourist mode so I join the rest of the clowns taking selfies and walking around looking directly upwards instead of in front of me.

Soaking up the atmosphere, I decide this is a fine time to grab a bite to eat – I mean why not wait till I'm in the most overpriced part of town before deciding I'm hungry? Clearly my frugal side is still reeling from the cash-dispenser from heaven for it not to sound a warning alarm at this point. Anyway, shortly later I find myself in Margon – a supposedly genuine Cuban sandwich bar right in the heart of the city. Now I don't know if you've seen the film Chef but I know Fez will back me up when I say I absolutely had to get a Cubano. By Zeus's beard, it's good. As I devour it, grease dripping down my hands, I hear a classic New York accent telling me to "enjoy it!" Looking around, I see that it's a guy sitting next to me at the bar with a big grin on his face. It turns out that he's a Cuban immigrant himself and personally knows the owner of the place – who had served me – and comes here regularly. I won't bore you with all the details but it does appear that I've found another eccentric companion to chat to – apparently I attract peculiar, if friendly attention.

$11 lunch done (*weeps*), it's time to check out a potential neighbourhood for living. This bit really is boring so I'm just going to fast forward past it and all my subway woes (I got on and off several times at the wrong stops – turns out the London Underground is remarkably well signed compared to it's US counterpart…at least that's my excuse) to the end of the day where I meet Aude's friend Gemma (my flatmate) and cook veggie sausage pie filling for the both of us. I say filling because I've asked Gemma to handle the pastry (which she agrees to in an inspiringly confident manner). Little do I know that this part would turn into a disaster where instead of shortcrust pastry, we would end up with some flaky substance made from self-raising flour which we'd name pread – a halfway house between bread and pastry…yum…

So as this day comes to an end, I well and truly feel like I've made a start to becoming a New Yorker, albeit a not very smooth one. Then again, as all of you know, if there's one thing that I've categorically proven I'm not, it's smooth – so I happily doze off knowing that at least one part of me won't change.