The Lost Colony of Roanoke 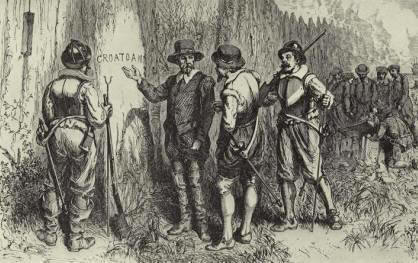 One of the most mysterious episodes in early American history is the disappearance of an English settlement on Roanoke Island. The story of the lost colony starts with Queen Elizabeth I's charter agreement with Sir Walter Raleigh.

In the early days of colonization, many of the efforts to profit from new found territories were in private hands. The Queen would give a charter (kind of like a lease) for a large swathe of land in return for the wealth and political advantage it brought to England. In North America there were several charters, which eventually became states. Raleigh's charter required him to establish a colony in North America or lose his right to the land.

In the spring of 1584, Raleigh sent an expedition to the area, which arrived on July 4, in order to study the possibility of a colony. Philip Amadas and Arthur Barlowe, who led the expedition, established relations with two native groups on the island of Roanoke, the Secotoans and the Croatoans. Two Croatoans returned to England with the ship and became informants about the geographical and political characteristics of the area and its peoples.

Using this information, Raleigh sent a second expedition made up of five ships in 1585. When they landed on Roanoke, 107 men disembarked and built a fort, which became the core of their settlement. However, they were not established enough to have crops to feed them so they were reliant on food supplies brought by ship.

When their relief vessel did not arrive in 1586, their situation became untenable and when Sir Francis Drake stopped at the island and offered them passage back to England, they accepted. They brought tobacco, maize and potatoes back with them, becoming the first to introduce the now common crops to Europe.

When the colonists relief supplies finally arrived, they found the fort deserted. Captain Grenville decided to continue the colonization effort and protect the conquered land, and left some of his crew behind with the supplies, then returned to England.

In 1587, a new group of 115 colonists led by John White set out for Roanoke. When they arrived they found no signs of life at the fort except for a skeleton, which may have been the remains of one of Grenville's crew. The colonists seemed to have successfully established themselves, initiating relations with the native groups in the area. The first English baby born on American soil was Virginia Dare, John White's granddaughter. However, they were still frightened of the natives, so they persuaded John White to go back to England to ask for reinforcements.

Unfortunately, during this time, the Anglo-Spanish war broke out leaving White stranded in England with no ships available to return to Roanoke. In 1588 he was able to hire two ships to take him, but the ships' captains decided to engage in some piracy, during which they were captured themselves, so the ships never made it. White finally made it back in 1590, but found the settlement deserted. The entire settlement had been dismantled and the only clue was the word "Croatoan" carved into the trunk of a tree. He believed that they might have moved to Croatoan Island, but was unable to conduct a search. Subsequent expeditions were unable to find out what happened to the settlers.

Theories About the Disappearance

Many surmised that they had been killed by the local natives, but there was no sign of the killings and the complete dismantling of their settlement indicated time and work invested.

There were stories that they had moved and been living peacefully among a group of natives, when their neighbor, Chief Powhatan, massacred them all. Another theory came from the reports that for the next hundred years explorers came back saying they had met Native Americans with blond hair and blue eyes who claimed to be descended from colonists. Others believed that the Spanish fleets had found the colony and destroyed it as part of their war against the English. None of these theories has ever been confirmed and the fate of the colony remains a mystery.

You can visit the site of the Roanoke settlement today at the Fort Raleigh National Historic Site. It is not only the site of the first colony in the U.S., but during the Civil War the Union Army hosted a settlement for slaves and freemen who were refugees from Confederate territory. The site is on the beautiful Outer Banks in North Carolina and its attractions include the visitor's center and museum, the Elizabethan Gardens (which cover more than 10 acres) and a play about the colonists which has been running nearly continuously since 1937.