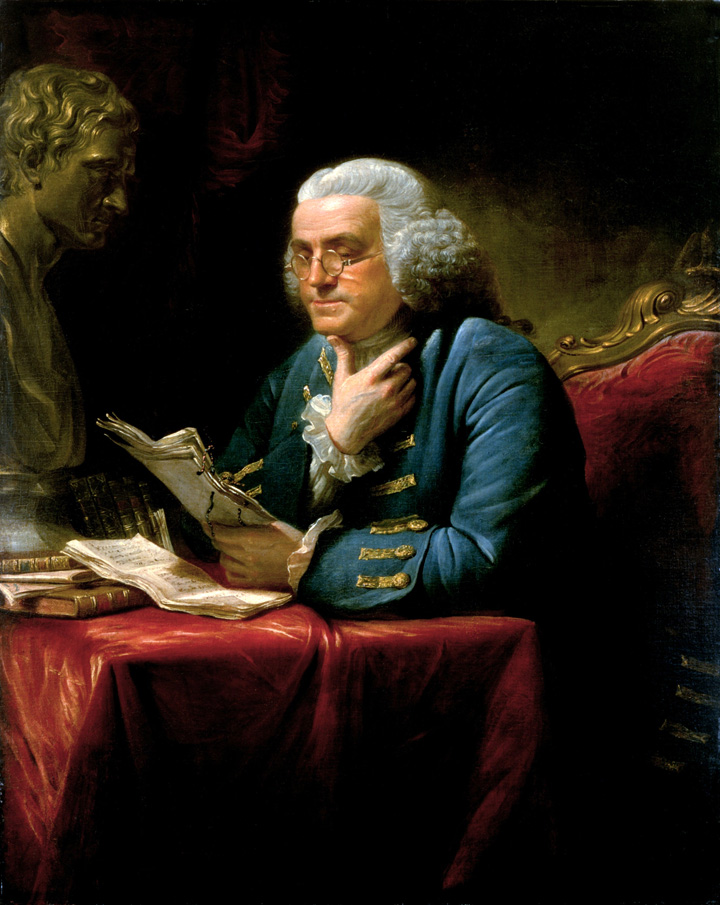 Benjamin Franklin was one of the most important Founding Fathers of the United States of America and accomplished a great deal during his life as a political theorist, inventor, printer, civic leader, scientist, author and diplomat. He also helped draft the Declaration of Independence and the U.S. Constitution, two documents that established and outlined the governance of the newly forming United States. Franklin was an active figure in the American Enlightenment period and is credited with several inventions, most notably bifocal glasses and the lightning rod. He contributed greatly to the study of electricity and oceanography. He also helped establish civic organizations in Philadelphia such as the first volunteer fire department and an academy that would later become the University of Pennsylvania. Politically he served as governor of the state of Pennsylvania, U.S. Minister to France and Sweden, Member and Speaker of the Pennsylvania Assembly and the first U.S. Postmaster General. Franklin and his many contributions during the 18th century and role in the founding of the United States are still celebrated and studied today.

Franklin was born in Boston, Massachusetts on January 17, 1706. His father was a soap and candle maker and Franklin was the 10th of 17 children. Though he performed well in school, he left at age 10 to help his father work. At 15 he became an apprentice to his older brother's newspaper, The New England Courant. This is where he wrote opinion pieces and witty letters about society under a pseudonym, since his brother would not let him publish anything. He continued working in the printing business after he ran away to Philadelphia in 1723. After a brief stint studying in London, Franklin returned to Philadelphia in 1726. During this time he held a few jobs as a bookkeeper, shopkeeper and currency cutter, and fathered a child out of wedlock, William Franklin. Franklin and his common-law wife, Debora Read (married in 1730), raised him along with their two children, Francis Folger Franklin and Sarah "Sally" Franklin. Francis died of smallpox in 1736. Franklin led a very interesting life, evidenced by his many and varying activities and successes.

1727: Formed the "Junto,"  a study and social group for young men in Philadelphia.

1729: Bought The Pennsylvania Gazette newspaper. In addition to publishing, he also contributed to the newspaper, but never under his own name. The newspaper printed the first political cartoon (by Franklin).

1731: Established a lending library to share his love for reading. This was the country's first subscription library.

1733: Began publishing Poor Richard's Almanack. At this time almanacs contained information such as recipes and weather reports and were issued annually. Franklin's (published under a false identity) was popular because the writing was especially lively and witty. Sayings such as the famous, "A penny saved is a penny earned" come from it.

1743: Invented the Franklin stove, a heat-efficient stove for use in the home.

1752: Conducted his famous kite and key experiment, which confirmed his studies and hypotheses about the nature of lightning and electricity

1757-1775: Traveled to England to represent Pennsylvania in a dispute with the Penn family over the colony's representation. Then represented Georgia, New Jersey and Massachusetts and became more involved in governance.

1775: Elected to the Second Continental Congress as as Postmaster for the colonies since he had successfully mapped out routes years earlier. He began actively working for independence.

1776: One of five men to draft the Declaration of Independence. After he signed it, he left for France to represent the United States as ambassador.

1785: Returned to the U.S. after many years in France as a diplomat. Elected to the Constitutional Convention, which would create the U.S. Constitution

1790: Urged for the abolition of slavery. Died at his daughter's home in Philadelphia on April 17.

Franklin's accomplishments brought him many places: Boston, Philadelphia, England and France. Any lesson in U.S. history would not be complete without learning about Franklin's many contributions-- in technology, politics and civil society. You can find the face of this leading historical figure on the hundred dollar bill.

Franklin is a symbol of the United States and is even referred to as the "First American" for his role in creating and defining the the new nation, politically, civically and even scientifically.

For more, see Benjamin Franklin A to Z and this short biographical video.