History of the American Flag

June 14th is Flag Day, which commemorates the adoption of the flag of the United States on June 14th, 1777, by resolution of the Second Continental Congress. In 1916, President Woodrow Wilson issued a proclamation that officially established June 14th as Flag Day. Although not an official holiday, the week of June 14th is designated “National Flag Week” during which the President will urge U.S. citizens to fly the American flag. Some organizations hold parades and events in celebration of America’s national flag and all it represents. To be a part of your community’s Flag Day events, check your local newspaper or civic offices such as Town or City Hall.

The current U.S. flag consists of thirteen horizontal red and white stripes with a blue rectangle showing 50 small white stars. The 50 stars on the flag represent the 50 states within the United States and the 13 stripes represent the 13 British Colonies that rebelled against the British Monarchy and became the first states in the Union. The colors were also chosen to represent very specific characteristics of our nation. Red symbolizes hardiness and valor, white symbolizes purity and innocence, and blue represents vigilance, perseverance and justice. The stars symbolize heaven and the goal that all men are striving to reach Heaven. The stripes represent the rays of light from the sun. The American Flag has not always looked as it does today, however. Let’s look at the flag’s progression from 1775 to the present! 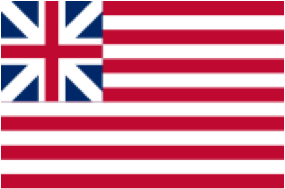 1775: The Second Continental Congress authorized the usage of the “Grand Union Flag” which had 13 alternate red and white stripes, which represented the unity of the 13 American colonies and the British Union Jack, or British flag, in the upper left hand corner, which represented the wishes of the colonial leaders to repair and maintain their relationship with Great Britain.

May 1776: It was reported that Betsy Ross sewed the first American flag, which is also supposedly designed by Francis Hopkinson, a popular patriot and signer of the Declaration of Independence. Although there is speculation about whether Betsy Ross designed the first American flag, many historians say that George Washington asked Ross to sew the flag of a design already sketched out. 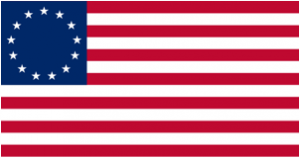 June 14, 1777: An official flag was established for the new nation when Congress passed the Flag Act, which stated the flag would be made of thirteen stripes, alternating red and white, and in the upper left hand corner, a blue field with a star for each of the 13 states in the union.

1812: The American flag was flown over Fort McHenry, which inspired Francis Scott Key to write the Star Spangled Banner poem, which was put to music to become America’s national anthem.

April 4, 1818: President Monroe declared that one star would be added to the flag on the 4th of July following the admission of each new state. 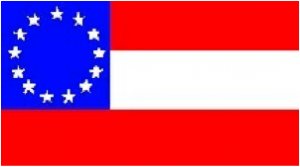 1861: The first Confederate National Flag had a few varying designs. It eventually had 13 stars for the 11 states of the Confederacy and two more added for Missouri and Kentucky, which were claimed by both the North and South during the Civil War. This flag is often called the Stars and Bars flag. 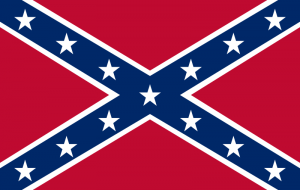 Legend has it that the Stars and Bars flag was not distinguished enough from the Stars and Stripes of the Union and was therefore confusing on the battlefield. However, the real reason the flag changed yet again to this design, called the Stainless Banner, was that the Confederate Congress was seeking a more “Confederate” flag to honor the army of Northern Virginia and to replace the First National Flag, which had split feelings in the South.

1860-1960: Over the next century, the pattern on the flag changed multiple times. In 1912 the flag went from six horizontal rows of eight stars to seven rows of seven stars in 1959. A new star was added to the flag as each state joined the Union. 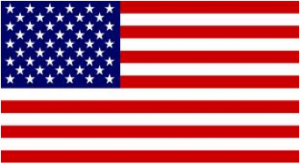 1960-Present: Alaska and Hawaii are the last two stars to be added to the American flag. As of July 4th 2007, the 50-star flag will be America’s longest serving flag. Today, the flag has 50 white stars on a blue field arranged in nine horizontal rows, alternating with 6 and 5 stars per row. There are thirteen horizontal stripes, seven red alternating with 6 white. The stripes represent the original 13 colonies and the stars represent the 50 states in the Union.