“…the only thing we have to fear is fear itself” 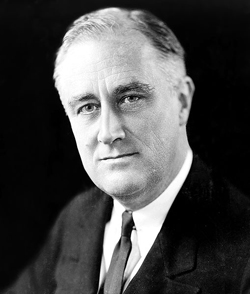 Franklin Delano Roosevelt, more commonly known by his initials, “FDR,” was the 32nd President of the United States. He is the only U.S. President to have been elected four times, having served from March 4, 1933 until his death on April 12, 1945. FDR is known for his leadership during the challenging times of the mid-20th century, including the Great Depression and World War II. FDR expanded the role of the federal government in developing a major relief and reform program called the New Deal to address the economic hardships facing the country. His wife, Eleanor Roosevelt, is one of the most admired First Ladies in American history.

FDR was born in Hyde Park, New York on January 30, 1882 to a prominent American family. He attended Harvard College and after graduating in only three years instead of four, he went on to attend law school at Columbia University. He never earned his law degree; he left school once he passed the bar examination. On March 17, 1905, FDR married Eleanor Roosevelt and the couple had six children.

After briefly practicing law in New York, FDR entered politics. He was elected to the State Senate in 1910 and was later appointed Assistant Secretary of the Navy. This role would prepare him for leading the country in World War II. FDR ran as the Democratic Party’s nominee for Vice President in 1920 but lost the race.

While on vacation in the summer of 1921, FDR became stricken with poliomyelitis (also known as polio), which put his political career on hold for several years as he dealt with recovery. FDR fought throughout his life to regain the use of his legs and for political reasons, he kept his illness private. He was careful not to be seen using his wheelchair in public for fear of drawing attention to his disability. FDR was able to walk short distances by wearing leg braces and using his cane, and when he spoke publically, an aide or one of his sons usually supported him. FDR also founded a treatment center to help polio patients in Georgia.

FDR was elected twice as Governor of New York in 1928 and 1930. FDR ran for President during one of the most trying periods in American history, the Great Depression, and defeated incumbent Republican President Herbert Hoover by seven million votes in November 1932. Thus began the longest presidency in American history.

Within the first 100 days in office, FDR got down to business with the extensive reforms he had promised. His “New Deal” introduced a variety of government programs meant to provide assistance, support and reform to the American people. He temporarily closed banks and implemented measures to help the farming industry and support the unemployed. Additional New Deal legislation included the Social Security Act, which provided unemployment compensation and a program that provided benefits to the elderly. Further, the Works Projects Administration (WPA) was established, which provided jobs not only for workers but also artists, writers, musicians, and authors.

By 1936, the economy showed signs of improvement. Gross national product was up 34 percent, and unemployment had dropped from 25 percent to 14 percent. However, the New Deal also had its critics. Some believed the sweeping changes to be unconstitutional; after all, never before had the government become so directly involved in areas of economic and social life. The relief and reform programs also significantly increased government spending and unbalanced budgets.

In 1939, FDR’s focus shifted overseas with war raging in Europe. Roosevelt stated that the U.S. was diplomatically neutral while making aid available to Britain, France and China. The U.S. was brought into the war after the surprise attack by Japan on Pearl Harbor on December 7, 1941 and Germany and Italy’s declaration of war on the U.S. in the following days. With expertise from his advisors and strong national support, FDR declared war on Germany, Italy and Japan. FDR worked closely with British Prime Minister Winston Churchill and Soviet leader Joseph Stalin in leading the Allies during the war (known as the “Big Three”) and he was instrumental in developing what would later become the United Nations. He promoted the formation of this “grand alliance” for peace.

The stress of the war took a toll on FDR’s health. In March 1944, hospital tests revealed that FDR suffered from many medical ailments. Three months into his fourth term as U.S. President, FDR died after suffering a stroke.

FDR is one of the most revered American Presidents. He is the longest serving U.S. President of all time, spending 12 years in the White House. FDR is known for his bravery, resilience and ability to lead the country through an economic depression and a major world war. Despite facing physical illness and a period of immense hardship for the American people, he had an everlasting spirit of optimism and persistence. FDR is an American to know.

To learn more about FDR, watch his mini biography video.