Day 3: 17th May, 2016: Inspirational presentations and a visit to a startup incubator

The day started with a debrief of the previous day, followed by a talk called “Introduction to changemakers” by Mentor. He introduced himself and told us his story about how he was a refugee and how he ended up working for bringing change in Kosovo after it became a free nation. Together in groups we were asked to find out-of-the-box solutions to problems like land mines, bullying, and inaccessibility to education. He also showed us what people are currently doing to eradicate these problems. Some of the work currently done and solutions that some groups came up with were pretty out of the box!

A few examples of solutions that I never would have thought of include using mice to locate landmines and bringing babies to class and letting 4th-5th graders interact with them to build roots of empathy in them.

One very important thing that Mentor said during the session was “Sometimes, along with leadership qualities, it takes a little bit of a luck to be successful, but it doesn’t take luck to be a nice person. No matter what you do in life, always remind yourself to be nice to people.”

Sometimes, along with leadership qualities, it takes a little bit of luck to be successful, but it doesn't take luck to be a nice person. No matter what you do in life, always remind yourself to be nice to people.

After Lunch in the afternoon we visited the headquarters of 1776, which is a global incubator for startups. I personally have always loved the idea of co-working spaces and sharing resources. And 1776 was so much more that that, specifically because it aims to solve some of the world’s most pressing challenges.

Later in the evening we did some trust exercises and role-play exercises with people we hadn’t interacted with yet.

Had a great presentation along with live polling on Rule of Law by presenters from the World Justice Project. It was great to know how they had collected Rule of Law data in so many countries and represented that data in a way that it was easy to compare. I had a lot of questions on its uses and implications. Some were answered in the Q&A round. Also I learnt that live polling was a much more interactive way of collecting and representating data, especially in a large group.

We also had a session of “Collaborative Civic Engagement” where we were asked, “What was the very first thing in United States that you found different from your country?”

“Toilets” was the answer that first came to my mind. I did try to come up with a sophisticated way to say this out loud. But then I remembered the first rule of I-LEAD, which is “be you”.

So I said what was true for me and it just felt good to say it! And it clearly made an impact. Two days later when we were all leaving and saying sentimental things to each other, I hugged one of the other delegate and she looked at me and said, “I have been wondering – what are the toilets like in India!?” I laughed, and this made me realize that people will remember if what you said was the truth (or simply what you really believe in).

We also did an exercise in which we were given a situation in the form of storyline and we had to come up with solutions for the situation from every subject’s perspective. This made me realize that most of the time, there is not one definite solution that will do justice to everyone involved. However, we can try and address the most critical ones and just keep on trying to do the best possible for the rest.

This made me realize that most of the time, there is not one definite solution that will do justice to everyone involved. However, we can try and address the most critical ones and just keep on trying to do the best possible for the rest.

We also heard a very interesting speech by Meghann Curtis which was followed by Andy Rabens, the US Department of State speaker. A few interesting highlights from the session are:

"What is the second thing that people fear the most? Death...Do you know what is the first? Public speaking"

"Everybody wants change but nobody wants to change"

Important issues were discussed, such as how to find a balance between family, leisure, and career. The conclusion was that you will always struggle, but everyone struggles. This talk also helped me to realize that there is not one formula to success or leadership. Like most things in life, it’s an individual process that everybody goes through - everyone must find their own way. I credit I-LEAD with triggering that process in me.

Next, we took on the most challenging exercise of the week. This was a Changemakers-2: Venture development session by Mentor Dida. In this exercise, we had to come up with a problem, analyze solutions, prepare a proposal, and then pitch it to people around the city! It was interesting, but challenging.

I was so excited to wear the I-LEAD T-shirt this day. We took alot of group pictures!

In the sessions, we discussed the challenges everybody faced the day before in pitching. After showing a very inspiring video, our Mentor introduced us to the following pitch formula.

Using this we were asked to prepare a pitch and present it later in the day.

We had our lunch and left for the city tour. The weather was great! We visited the Capitol, the Lincon Memorial, The Vietnam War Memorial, The White House, and the Martin Luther King memorial. We had a really wonderful dinner, and then all of us went to a club in Georgetown to celebrate our last night together and danced alot!

It had finally arrived. The day we would all get separated. It was harder to say goodbye than I thought it would be. I couldn’t believe I knew so many people all around the world now. There was so much energy and power that I felt when we were all in one room. That all started diminishing as people started to depart. There were many with whom I didn’t get a chance to interact, but we exchanged smiles! After the final debrief, an amazing graduation ceremony, a lot of kind words, and some tears, we separated, only to make the world a better place together.

After the final debrief, an amazing graduation ceremony, a lot of kind words, and some tears, we separated, only to make the world a better place together.

I really hope I can retain these thoughts, this energy when I go back to my home country - India - and do something worthwhile for the people. Slowly in 6 days this trip changed me at many levels.

Be sure to check out Part I of my story! 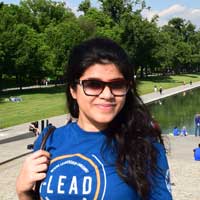 Surabhi Khanderia is a participant on our Intern USA program and an architecture student at CEPT University in in Ahmedabad, India. Surabhi is currently pursuing an internship with B & A Architecture in Kansas City, MO, USA.