Go Big or Go Home: Everything Is Bigger in the USA

As an international intern or trainee, you have probably noticed many differences between American culture and that of your home country. One of the biggest differences is that things in the U.S. tend to be a bit larger than in the rest of the world!

Portion sizes for food in the U.S. are notoriously large. It is a driving factor behind America's growing obesity problems. Since the 1970s, portion size has been growing consistently and is now causing national attention. Hamburgers have grown by 23% in the past 20 years and soft drinks have increased in size by 52%. Even plates themselves are larger today than they were two decades ago, with most restaurants serving food on 12-inch plates, up from 10 inches in the 1990s. This means that restaurants are filling larger plates with more food, and most individuals do not notice the change. As an international visitor, it is important to be aware of these differences in food sizes and be aware of the health effects they can cause. While we would encourage you to sample different cuisines while in the U.S., you may want to eat only a portion of your meal and take the rest home in a "doggy bag".

In addition to the size of food itself, we also have a larger variety of foods on the shelves of supermarkets and superstores like Walmart, K-Mart and Target. The supermarket as a concept grew in the 1950s and became a symbol of American culture. Even though supermarkets are now common in other parts of the world, they are still larger here than anywhere else. For example, the average American supermarket stocks 40,000 unique items, while European stores have approximately 18,000 items.  Moreover, U.S. stores are on average twice the size of their European equivalents. Americans also like to shop for things in "bulk." Warehouse stores such as BJ's Wholesale Club, Sam's Club, and Costco offer buyers huge bargains for large supplies of food and goods.

When you arrive in the U.S., you will also notice that American cars are much larger than their international counterparts. You will likely see many Sports Utility Vehicles (SUVs), vans, and pick-up trucks on the roads in your neighborhood. While cars have to be small enough to fit on narrower roads in Europe and other parts of the world, they had the space to grow to a much larger size in the U.S. Even today, with global gas prices on the rise and carbon emissions of larger cars under immense scrutiny, Americans are still buying huge trucks and SUVs. The reason why Americans are drawn to larger vehicles is the subject of much debate. Some people like them because they give the illusion of being more secure, while others choose to drive them simply because they have more space.

A third change you may notice is that houses in the U.S. are on average much larger than homes in other parts of the world. Over the past few decades, American home size has been steadily increasing. In 1970, the average home was 1,500 square feet and rose to almost 2,500 square feet just before the recession in 2008. Throughout American suburbs, large homes nicknamed "McMansions" had become a popular trend. These are big homes that often seem out of place in their neighborhood and seem to dwarf their surrounding neighbors.  McMansions have taken a lot of criticism in recent years and are starting to be seen as a marker of American excess. However, since the recession, the trends in housing show that Americans are starting to favor smaller, more practical homes causing the average home size to decrease slightly in recent years. 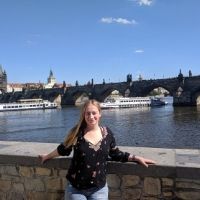