Support "Our Ocean" - How to Get Involved

Last year, the U.S. Department of State hosted the first “Our Ocean” Conference in Washington, D.C. Individuals, experts, and the international ocean and foreign policy communities from almost 90 countries came together to discuss problems and effective actions, share the best science, and offer unique perspectives.

“The conference was a great success and resulted in new partnerships and initiatives valued at more than $800 million to conserve the ocean and its resources,” according to a representative at the Bureau of Educational and Cultural Affairs. 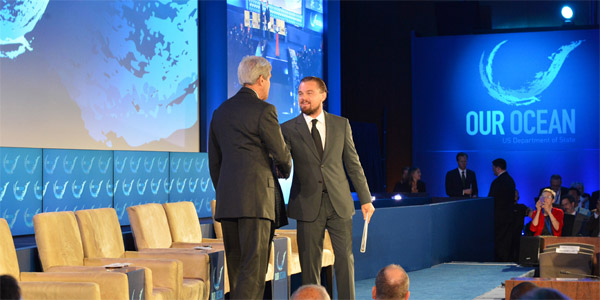 Leonardo DiCaprio shakes hands with Secretary Kerry prior to delivering remarks at the ‘Our Ocean’ Conference in 2014. Image courtesy of the U.S. Department of State.

This year, Chile will host the second Our Ocean conference in Valparaíso from October 5-6. Several initiatives leading up to the 2015 conference encourage action to protect the ocean, providing a great opportunity for InterExchange program participants, alumni, and their local communities to get involved with outreach and volunteer activities in support of Our Ocean!

Support “Our Ocean” and Participate in the International Coastal Cleanup

Post photos or a video clip of your participation in cleanup events on social media using the official Our Ocean conference hashtag #OurOcean2015 and the official International Coastal Cleanup hashtag #2015Cleanup.

The Department of State also shared the following ways to get involved:

Follow the Department of State’s Bureau of Oceans and International Environmental and Scientific Affairs on Facebook and Twitter, and engage in social media conversations about ocean topics using hashtag #OurOcean2015.

Follow the Our Ocean 2015 conference live online on October 5-6, and use hashtag #OurOcean2015 to engage in conversations about the conference on social media.

Read about our participant’s experience as an intern with the Ocean Conservancy, and get her host’s perspective as well!