Yearning to immerse myself in the Chinese language and culture, I traveled to Yongtai County after graduating with a degree in neurobiology and East Asian Studies to volunteer at the County Hospital. With funding from InterExchange’s Christianson Grant, I had the financial means to undertake a year of service in China.

Initially, I was perplexed by his stated diagnoses of several patients. Having previously shadowed physicians at a pediatric urgent care unit during college, I had witnessed common illnesses that affect children, discussed cases and treatment with attending physicians, participated in routine check-ups, and helped record vital signs. Like pediatricians in the U.S., Dr. Xiao used a stethoscope to listen to heart and lung sounds. However, he rarely ordered chest x-rays, blood tests or other invasive procedures, and focused with unusual intensity on external diagnostic methods such as the patient’s pulse and the color of the tongue.

On more than one occasion, he used poetry written in ancient Chinese as a mnemonic and stated that the diagnostic methods and treatments he prescribed were detailed in medical books written centuries and even millennia ago. What I heard and witnessed went against my concept of medicine as a young, constantly evolving evidence-based science. However, I was fascinated by this new perception of the human body.

Despite the complex knowledge of connections and homeostasis that must be mastered in order to effectively practice Chinese medicine, Dr. Xiao was able to teach me some basic principles. One important axiom was, “If there is a problem in the interior, it will manifest itself on the exterior.” Chinese medicine avoids costly and invasive procedures in favor of emphasis on medical history and extended physical examinations. It was crucial to intently analyze the pulse in order to assess organ function and scrutinize the color of the tongue to gain insight into the state of the “heart” and “spleen.” With an impressive power of observation and deductive reasoning, Dr. Xiao turned minor, almost imperceptible indicators into diagnoses and treatment.

At first I was skeptical and even dismissive of what to me sounded like the type of medicine practiced by traditional healers who employ herbs, physical therapy and religious rituals in curing illness. Fascinated by cosmology and technological innovation from an early age, I saw their approach as pseudoscience in conflict with modern evidence-based medicine. However, shadowing Dr. Xiao, I realized that he and other medical professionals at the university hospital saw Chinese and Western medicine as complementary, not antagonistic. There was no reluctance to using Western treatments when deemed necessary or more effective.

As I learned more about Chinese medicine, I realized I had been quick to judgment and that linguistic and cultural differences prevented me from appreciating its insights. Poor translations and the natural desire to find equivalence between Western scientific medicine and Eastern theories hindered my understanding.

Returning from China, I pondered how detrimental the barriers we create based upon accidents of history, geography and the infinitesimal amount of difference in our genetic makeup are for global understanding and the progress of humanity. — Gibran

My year volunteering in China sparked a new interest in international medicine and global health. I transformed from being solely concerned with my immediate community to looking at problems on an international scale. I aspire to not only become a great clinician, but to also take a leadership role in medicine promoting cultural awareness and efforts in solving the most pressing health problems facing the global community. I am eternally indebted to the InterExchange Foundation for making this life-altering experience possible.

"After returning from my international volunteering experience, I matriculated at Harvard Medical School. Reflecting on my service project and my medical training thus far, I feel my time in China was foundational in becoming an empathetic, compassionate physician for my patients who thankfully come from a myriad of cultures and backgrounds. I graduated from the Harvard Medical School/Harvard Business School Joint M.D./M.B.A. program in 2015, and I am currently a resident physician at the Massachusetts General Hospital Department of Anesthesia, Critical Care and Pain Medicine."— Gibran Minero 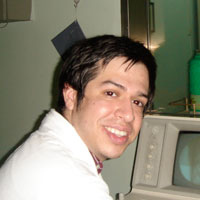 Gibran volunteered in China with the help of a Christianson Grant, from the InterExchange Foundation.