Getting out of the Comfort Zone in Cyprus

Last weekend, I met up with a group from CouchSurfers, a group I would highly recommend if you find yourself in a new place (it is worldwide). Both locals and international people living in the area meet up for trips, and host each other for some amount of time to share their area with a newcomer. When I travel to a new place, it's easy to feel overwhelmed - what are the most important things to see? And how will I get from one place to another if I don't speak the language yet or know the roads? To me, the best way to learn is to have a local show you their favorite spots - take advantage of the people who have an "in" locally. CouchSurfers are on the site because they also want to meet new people, and your profile has an option to say if you are open to hosting or not. For myself, I'm not interested in hosting at this point. And I don't need to couch surf at this point either. But a few times a year, the local CouchSurfers take a trip to the mountains or beaches for a night. Luckily, when I joined CS, there was an upcoming event that weekend. And that is how I, as a New Englander, found myself in the snow again.

The Troodos Mountains make up the largest mountain range in Cyprus, located in the center of the island. In the valleys are rural villages, wineries, monasteries and churches. It's a beautiful drive through the mountains from the city, and it gave me some time to get to know the people I was with. A group of 15 of us arrived in Platres, a village that dates back to the 1100s. The houses are built along the sloping, winding, narrow roads. We did some hiking in the area and ate at a local taverna for lunch. We then made our way to our temporary house for the night, in a large flat with central heating (!) and a full kitchen. A few more friends joined us, and over a homecooked meal, we got to know each other.

The group consisted of me (the only American), Greek and Turkish Cypriots, Lithuanians, Polish, Spanish and Armenian friends. Many of them had been to separate CS events, so I wasn't the only person who didn't know anyone else. It was truly an amazing experience to have conversations with people whose backgrounds are so different than mine. We discussed international politics, culture, travel and Cypriot life. None of us even mentioned work! It was so refreshing to spend time with such an open and welcoming group, and I plan on seeing them again in the summer for a camping trip to the Golden Beaches of North Cyprus. We finished off the weekend with another hike up to the peak of Troodos and one last souvlaki in Kakopetria. I arrived home exhausted but full of energy from a long weekend of fresh air, delicious local food and wonderful company.

This past weekend, one of my CS friends from North Cyprus got in touch and offered to take me around the North for the day. I was thrilled, because I've been interested in going, but I don't speak Turkish and there is no public transportation there. In short, I knew I couldn't make the trip alone. We agreed to meet at the UN border that splits Nicosia. As I got my visa stamp and crossed the border, I noticed the changes around me instantly. Remnants of the war of 1974 are still visible - oil drums and barbed wire are left discarded. I felt like I had stepped back in time. A line of cars snakes down the street, awaiting the only crossing point to the South (there are three pedestrian crossings and only one vehicle crossing). Signs began to change from Greek to Turkish, and as we drove along, the changes became even more evident. Because the North is considered a territory occupied by the Turkish military, it is not considered a country by any international organization. No international companies can legally franchise there, so I was amused to see knock-off chain restaurants with the same designs, colors and fonts as their international counterparts.

For example, Kyrenia Fried Chicken replaced Kentucky Fried Chicken, and Pizza Hat replaced Pizza Hut. On one of the mountains is a GIANT painted (and I mean giant, it's designed to be seen from the South) Turkish flag. The red and white flag even lights up at night.

When I asked my friend how he felt about this, he responded with, "How would you feel if you were made to be a minority in your own country?" He said that often the North has power outages, and yet the lights on the Turkish flag never go out. Turkey wants the land (Turkish Republic of Northern Cyprus) to be internationally recognized. However, due to what many consider to be an illegal occupation, and the property reassignment that caused many Northerners to lose their homes without compensation, it is not possible. The issue is truly political - most people I have met do not hold resentment toward those on the opposite side of the island. However, they disagree strongly with the current situation. The northerners are economically less viable with their current status, as evidenced by the inability of international companies to locate there.

Being in the North felt like I was walking around in another century. We drove by lots of military personnel at various points. The land truly feels occupied, and the military presence is very real. The Turkish army, 15,000 strong, has also taken the most attractive parts of the island for its bases, so many of the best areas along the coast are not available for public use. Sunday is the day off for the army, so as we wandered around town I understood why I saw only a few women and hundreds of men!

The North is very rural, with a beautiful, mountainous skyline. My unofficial tour guide had planned a day that included exploring some castles, visiting the marina and finishing the day with a local dinner. We began at St. Hilarion castle, a castle of 101 rooms that is allegedly the inspiration for Snow White and the Seven Dwarves. As we wound up the mountain on stone steps that have survived the passage of time, we explored the different rooms and towers in the castle. The area has been well preserved, and once I reached the top I could see why. The view was amazing - I was looking out across the mountains, watching tiny cars wind through the valleys. I looked out over the city of Kyrenia, which would be our next stop. My friend pointed out the areas of town, and the marina which holds another famous castle.

After enjoying the view, we made our way down and had a coffee from the kind, elderly couple who operate a cafe at the base of the mountain. We moved on to Kyrenia, and explored Kyrenia Castle. The marina is the site of a famous shipwreck, and many of the artifacts are preserved and on display for visitors. We walked along the crystal-blue water, and browsed the cafes and restaurants full of people enjoying the nice weather. By this time, we were both starving, so we headed to a taverna in Bellapais ("beautiful country") for dinner. My friend knew the staff very well, and we got a table overlooking the sunset on the coast. We ate traditional Turkish Cypriot food, including a meze of eight cold dishes, two hot dishes and a variety of kebabs. The meal included homemade Cypriot bread, olive oil, hummus, tahini, tsatziki, bulgher, halloumi, potatoes, chicken, lamb and pork. Needless to say, we couldn't finish it all.

The food here has been amazing - lots of local produce, dairy and meats. I supposed that is the advantage to being on an island. Some say the difficulty of living here is the less convenient travel to other countries; but, if you are going to be stuck on an island, you will at least be eating well! My friend dropped me off at the border, and I reflected on my day once I returned to my apartment. I cherished the time spent discussing the political situation from the viewpoint of a local. I love political science and history, but often it is hard to really understand the complexity of a situation until you speak to someone who has lived in that area. I find it hard to make my own judgements about another community's issues unless I understand it fully from different points of view, so gaining his perspective as someone who grew up in post-war Nicosia was a valuable experience to further my own understanding of the region and the challenges it faces both internally and externally.

After two weekends of travel, the bottom line to my readers is this: when you are in a new place, there is no need to reinvent the wheel. Let someone who knows the area show you his or her favorite spots, and with an open mind you will most likely find the place as wonderful as she or he does. I personally love going to a new place by myself, but sometimes letting someone plan a few things can highlight the most worthwhile sites to see. So, don't be afraid to join a group without knowing everyone else - you never know who you might meet, and what experiences that may open up for you.

On another note, my home team just made the Super Bowl, so on February 1st, I will get back to my American roots for a day and cheer on the Patriots from across the world. (And maybe I will introduce some locals to American culture!)

Maryann received a Christianson Fellowship from the InterExchange Foundation to support her efforts at the Strengthening Asylum project, a program funded by the United Nations High Commissioner for Refugees and part of the Future Worlds Center. 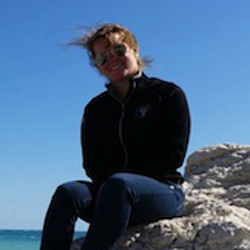 Maryann volunteered in Cyprus with the help of a Christianson Fellowship, from the InterExchange Foundation.