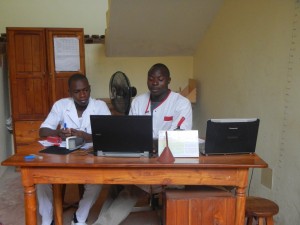 Hi! My name is Alicia and I'm currently working in Kara, Togo at an HIV clinic (AED – Association Espoir pour Demain-Lidaw), helping with data management and trying to build a robust, scaleable data management and analysis system with the staff members here. In this blog post I explain a little bit about our current network setup and the connectivity problems we've faced that have made it hard to break free from paper and pencil record keeping.

But don't worry! This blog post isn't full of complicated technical language or ideas, and even if you're not a computer person I think this is an interesting story about why using technology in a rural setting can be tough, and the barriers that exist in places like Togo for tasks that we take for granted in the U.S. like plugging things into outlets and having them work and using Google products.

Why can't we connect??

The big question that all of the staff at the clinic ask me is "Why can't we connect?" We have computers, we have a modem and routers and we have an ADSL line coming into our building that provides Internet service from TogoTelecom that we pay an exorbitant amount for each month, but still, during one to two days per week we spend most of the day not able to connect to the Internet.

The answer is that there are four major barriers to connectivity at the clinic: (1) faulty electricity, (2) faulty hardware, (3) unfortunate architecture, and (4) poor Internet service.

First, I went through the clinic with a voltmeter (just what it sounds like, a tool to measure voltage, or how much electricity there is) and discovered two main problems with our electrical outlets. One was that the electricity coming to us was extremely volatile, meaning that there were periods of time with less power (sort of like a brown-out, and our routers would shut off), and periods of power surges, where the voltage coming through was so high that it would completely fry any small device that was plugged in. We also lose power at least once per day, usually for two to five minutes at a time, but sometimes for hours or even days. The other problem was that our outlets aren't grounded, which is pretty scary to me! In a sturdy electrical setup, there's a wire that goes from your outlet all the way deep into the ground, so that if there is a power surge (think lightning strike) the extra electricity gets diverted into the ground where it dissipates, rather than all flowing into your device.

The second problem, faulty hardware, goes along with the first. The routers sold in Togo and in the U.S. are just not robust to the kinds of erratic power situations here. With power surges happening regularly and no grounding to protect us, we've gone through seven routers in the past year, and all have failed within a couple months due to power surges. Unfortunately, re-wiring the outlets to add in the ground would be an expensive and disruptive project, as we'd have to rip open all of the walls and re-do the whole system.

The third problem, our unfortunate architectural setup, is pretty common in West African construction, so I bet there are other NGOs and businesses struggling with the same thing. We operate between two buildings, an administrative building and a medical building. They are both made of thick concrete walls and rebar, and stand about 20 feet apart. A router can't reach from one building to the other, and even worse, a router can't even reach from one side of our medical building to the other when it sits inside of someone's office, because of the thick walls. Unfortunately, putting the router in the middle of the building, in the hallway as opposed to inside of an office, is not an option because our buildings are both open in the center, which lets in light and air but also rain and wind. One way to get WiFi signal to everyone is to use multiple routers connected in a row, which is potentially problematic as well, because if one breaks then the error can cascade into the rest of the system, bringing down the service of everyone else who is farther down the line.

The fourth problem is simply that even when the power works and the routers are on and you're close enough to get a signal, the Internet service that we pay for has intermittent outages and is extremely slow during busy work hours, like Monday mornings and right at the end of the work day. 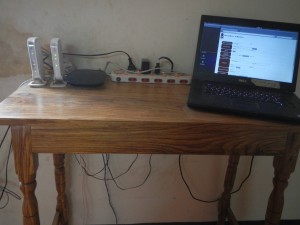 Our new and improved network setup!

My solution tries to address these problems, and while far from ideal, it has worked pretty decently over the past few months. The ADSL line comes into the administrative building and into a modem (which manages the signal), which is connected to a switch (essentially a power strip for Ethernet cables) that allows us to have one router in the administrative building which, if it fails, will not affect the rest. We also have a server computer (a laptop so that when we lose power, it can still work for a couple more hours), which is connected to the switch, meaning that people can talk to the server if they are connected over WiFi to any of the routers in the system. Next, a cable goes out of the switch and under ground to the medical building where it connects to a router and then a WiFi extender. The extender is like a megaphone for the signal, and allows the network to be reached by every office, even though a router in its place couldn't. Each of these devices (modem, switch, server computer, routers, extender) is plugged into the wall through a UPS, an Uninterruptible Power Supply (the name is misleading, in Togo they are definitely interruptible) which acts as both a voltage regulator, stabilizing the voltage coming through the wall, and acting as a backup battery for when the power goes out. These have done a great job of both keeping our network up during the two- to five-minute power outages and of protecting our routers from getting fried, but they're not powerful enough for when we have more than an hour of power outage (~twice per month).

I'm really proud of getting all of this set up, because it has greatly improved the consistency of our network and opened us up to the possibilities of using our newfound connectedness to our advantage in terms of data entry and analysis. Which leads to the next big question…

What data management system to use?

For a long time, the clinic has been doing all of its data entry and record-keeping on paper, but when the clinic got a big donation of ~20 (very old) computers two years ago, we started having more options, and it was necessary to weigh the pros and cons of each. This is an ongoing and heated debate, and we currently use a combination of four systems: paper, Excel, Google Drive and a Network Database (computers can connect to it wirelessly through our routers, but it does not require Internet access).

One factor to keep in mind is whether the system will always work. Paper forms never fail, whereas an Excel spreadsheet could get lost or deleted, or be unusable if the user's computer runs out of battery. The network database can fail if the computer dies or if the router doesn't work, and Google Drive fails in both of those cases and if we don't have an Internet connection.

Another important factor is having data be up to date. With the network database and Google Drive, data is always completely up to date, even to the point where if a nurse takes a patient's temperature and then walks down the hall to see the PA, the PA can see the patient's temperature on screen immediately. Excel, however, is only as up-to-date as the last time that all of the different versions of the spreadsheet on everyone's computers was synced, and this syncing is difficult, because what happens if one nurse deleted a column by mistake, or two PAs wrote down different CD4 counts for the same patient?

A third factor to consider is how easy and intuitive data entry is, and how corruptible the data is. In my opinion, Excel and Google Drive are excellent tools for data storage and analysis, but they're really not meant to be used for data entry, because it is easy for someone to delete a formula or type in a wrong number and have that error cascade down into messing up all following cells and calculations. It would be much better if our nurses and PAs could fill out computer forms that look like the paper forms they used to fill out, rather than complicated tables and spreadsheets. Therefore, while still in college on a service trip to this HIV clinic, a friend and I advocated for the use of a network database. You access it on your computer through a browser (like Firefox or Chrome), but it isn't actually on the Internet, saving us from the problem of inconsistent Internet access from our provider as well as the security problems that open up when someone far away could hack into your system through the Internet. The database is hosted on a server in our clinic, and the routers that put out WiFi for people nearby to use the Internet also allow for people to connect to the server and the database. It feels like you're on the Internet filling out a SurveyMonkey form or something, but it's actually just wirelessly transmitting data exclusively within the walls of our clinic. On that trip, my friend and I built a simple web app database to be used over the network for AED, and about half of the clinic's programs currently use it to record their data. However, this is just a small, temporary solution and there are many professional options for really sophisticated network databases that we could implement at AED in the future, such as OpenMRS. However, having our new hardware infrastructure in place makes the option of using a network database even more appealing and accessible.

This may sound boring, or just like little victories, but it has been incredible to see the change in workflow and data flow thanks to these small changes, and I'm excited to see what AED's data system evolves to in the future!

In my free time, during lunch breaks and weekends, I've been apprenticing with a Tailor named Aunti, and I've been learning how to sew some simple Togolese outfits using the beautiful printed cloth here called pagne. Here's a picture of me working next to Aunti on her old pedal sewing machines! 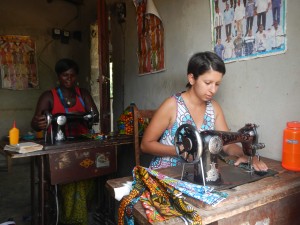 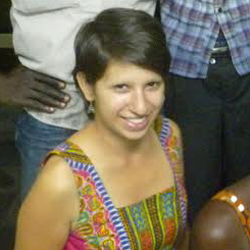 Alicia volunteered in Togo with the help of a Christianson Fellowship, from the InterExchange Foundation.