Culture Shock in the Dominican Republic

In September 2016 I moved to Cabarete, Dominican Republic (DR) to volunteer with the Mariposa DR Foundation to promote holistic education for girls from under-resourced families. Prior to moving to Cabarete, I’d spent a year teaching Spanish literacy in Esperanza (a rural town about 60 miles away) to a marginalized community of predominantly Haitians and Dominicans of Haitian-descent.

A photo posted by Mariposa DR Foundation (@mariposadrfoundation) on Nov 24, 2016 at 7:15am PST

I knew my experience with Mariposa would be different, as Cabarete is located in the tourist-central province of Puerto Plata. I was excited to see how the change in contextual backgrounds would give me a fuller understanding of Dominican culture, history, and society. However, even knowing the change would be big, I wasn’t prepared for the culture shock.

Although Cabarete is a small town with a population of just 14,600, it is ranked number two among the best beaches for kiteboarding, which has created a huge tourist and ex-pat community.

A photo posted by Cabarete Palm Beach Condos (@cabaretepalmbeachcondos) on Dec 15, 2016 at 6:56am PST

My neighborhood is a small, predominantly Dominican community lined with Dominican mainstays such as colmados (corner stores), comedores (dining places with traditional Dominican food), and hair and nail salons. Once I exit my street and walk along the main strip, however, it’s a whole other world. Spas and multicultural cuisine - that can be double the price or more of a typical Dominican comedor (and with half the food) - are abundant. Friendly waiters greet me in English at these establishments.

The hotels along the street are tall, shiny, and glorious. Though there isn’t 24-hour electricity in my neighborhood - which is common in the DR - there is electricity on the main street, and many houses have generators for outages. There are also gated neighborhoods and grocery stores selling multicultural fare.

When I compare it to Batey Libertad, the primarily Haitian-Dominican community where I worked and spent most of my social time last year, Cabarete seems like a paradise. The Batey is a small, close-knit and beautiful community because of the people, but it is not one of luxury. Sources of income mostly include low-paying agriculture jobs, small shop ownership, lottery-ticket sales, and other jobs that make it difficult to live and build wealth. There is no easily accessible professional or semi-professional job market, such as the hospitality industry in Cabarete.

A photo posted by Mariposa DR Foundation (@mariposadrfoundation) on May 29, 2016 at 6:40am PDT

When I left the Batey, the community had only recently received electricity for nearly 24 hours per day; there still isn’t a consistent schedule of running water. People use reserved water for “bucket baths” when the tap is dry and no one has an indoor toilet.

Understanding Different Spheres Within a Community

The contrast between the Batey and Cabarete made for a tough transition. I didn’t like the existence of the strong tourist/ex-pat community in the latter and I didn’t like when people spoke to me in English or the fact that so many people here speak it. I can’t put my finger on why, but it has something to do with balancing the fine line between the globalization and Westernization of a place.

While I appreciate Cabarete’s tourist industry because it brings a job market that many other areas of the DR don’t have, many families have several hurdles to jump in order to land these positions, including lack of education, affordable healthcare, and challenging family situations. The industry also creates an underground market for prostitution, which attracts many young girls.

I was confused as to how the Mariposa DR Foundation served girls at risk and in poverty when I couldn’t see poverty in the frame I was used to seeing. Although I live in the same general area as the girls that I work with, I don’t experience their community as they do. Unlike many, I have a generator when the lights go out. My apartment sits high, so I don’t have any flooding issues when it rains. However, several of the girls live in poorly constructed houses where rain creates major flooding problems.

A photo posted by Mariposa DR Foundation (@mariposadrfoundation) on Nov 14, 2016 at 9:11am PST

I’m learning more about Cabarete and learning to appreciate it for what it is, rather than comparing it to where I was, and I’m looking forward to better understanding the community and all the different spheres within it. 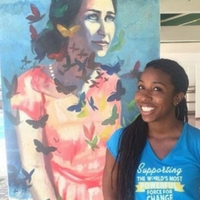 Keara volunteered in the Dominican Republic with the help of a Christianson Fellowship, from the InterExchange Foundation.