In August 2016, I moved to the Dominican Republic to work with the nonprofit Yspaniola. I support educational programming for youth in Batey Libertad, a marginalized community with limited access to many basic civil and educational services. Over the last five months, I’ve witnessed stark inequality among neighboring communities. I’ve also learned a lot and strengthened my resolve to help others.

As a community-based organization, Yspaniola is involved in more than just educational programming. We’re part of day-to-day community life. I’m often invited to baptisms, weddings, funerals, and other events. At first, I didn’t realize how important managing community relations would be to our work. While here, I’m expected to become culturally fluent in the Batey community. In order to facilitate this process, Yspaniola requires a weeklong homestay experience with a local family. I live in Esperanza, which is just 15 minutes from the Batey; however, the difference between the two communities is profound.

On the ride over, the scenery outside my window changed dramatically. We left the city life of Esperanza and entered a landscape of rolling mountains, greenery, and rice fields. Densely packed houses of tin and wood and loose wires lined the trash-littered streets. The community was noisy, bustling with a mixture of Haitian kompa music, Dominican bachata songs, children shrieking with delight, and mothers ushering them home.

At first, I was unable to distinguish many of the conversations around me. I thought I was simply having trouble with Dominican Spanish. However, it wasn’t Spanish I was hearing; it was Haitian Creole. Since most community members speak it, I knew it was imperative to acclimate myself to the cadence and rhythm of the language.

My host mother Timami, a well-respected woman with three young daughters, introduced me to numerous community members and included me in her daily rituals of preparing food and caring for her children. During the week with them, I began to fall in love with the Batey.

It’s hard not to get to know one’s neighbor in a community as densely populated as this one - over 600 people live in a space about the equivalent of two football fields. Most residents are of Haitian descent and have been effectively marginalized by the Dominican government and society. They’ve created their own home and space in Batey Libertad, which like most bateys, arose from the need for housing for migrant agriculture workers in the Dominican Republic.

A photo posted by Princeton in Latin America (@princetoninlatinamerica) on Dec 2, 2016 at 9:38am PST

The conditions in the Batey are dire, with infrequent access to running water, electricity, and sometimes food. My showers consisted of freezing cold bucket baths (which I would later find extremely refreshing in the scorching Caribbean heat!) and I used latrines, or shared community outhouses. Hygiene and sanitation are very important issues here as the government infrequently picks up trash in the community, sometimes going months between trash stops. As a result, garbage piles up or ends up in the river behind the community, contaminating a source of drinking water and creating a dangerous space for children to swim.

As I sat at the dinner table or stayed up late with Timami’s family and friends, I heard many stories of struggle, including finding dignified work, obtaining documentation from the Dominican government, and securing a brighter future for their children. They described how Yspaniola helped many with these issues: employing several members of the community, helping with documentation efforts, and teaching students in the community’s Learning Center. As I absorbed their stories and tried to pick up a few words in Creole, I began to feel the gravity of my position here and the need that Yspaniola’s presence fills in the community.

At the end of that week, I returned “home" to Esperanza with its sturdy buildings, indoor plumbing, and relatively modern conveniences. To say that I was in shock would be an understatement. I had just spent the past week of my life literally 15 minutes away in what felt like another world.

A Semester of Growth and Change

Over the following weeks it became evident that local residents treat people with darker skin or people suspected of being of Haitian descent vastly different than lighter-skinned Dominicans or foreigners. This mistreatment and lack of access to basic services contributes to the cycle of poverty.

I admit that even now, five months after my initial Batey Libertad experience, I often return home from work with bouts of reverse culture shock by the conditions experienced by people I’ve grown to love. Sometimes, it’s incredibly hard to shake off the events of the day as I enter the van that transports me from my “work” to my “home”. I often struggle to unwind at the end of the day as I contemplate how my work impacts so many children and families. I can’t afford to mess this up. So many people are counting on me.

Throughout my time in Esperanza and Batey Libertad, I’ve been working hard to continue building these all-important community relationships while supporting Yspaniola’s vision: to provide quality educational programming that will position youth from the Batey to excel and improve their circumstances. As director of the Learning Center, I supervise over 140 students in eight daily classes, as well as five local teachers and four local assistants. This year, our Learning Center’s goals are to release more responsibility to local staff as we provide ongoing teacher training and workshops, conduct monitoring and evaluation, and build our very own curriculum this year.

This semester has been one of growth and change. One thing I have certainly learned is that this community is resilient and from them, I am slowly learning to accept the things that I cannot change in a day or a few months. I resolve that the time I have here is meant to build community, to learn more about the people whom I serve and to do my part, however small, in the ongoing fight against inequality. 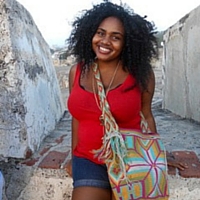 Tiffany volunteered in the Dominican Republic with the help of a Christianson Fellowship, from the InterExchange Foundation.