For the past year, I have said Kawp koon ka when I picked up pad thai for dinner, Che zu tin ba deh when I order my morning tea, and Tablu when I finished a work meeting. Each of these phrases means thank you in a different language – Thai, Myanmar, and Karen. When you come to Mae Sot, Thailand, where I lived and worked, you are immersed in not one but many new cultures, languages, and histories.

Mae Sot is a border town: the western limit is bounded by the Moei River, which separates Thailand from neighboring Myanmar (formerly known as Burma) There is the ironically-named Friendship Bridge that joins Mae Sot and Myawaddy (the border town in Myanmar), although many people choose to float across the river in an inner tube because they do not have the paperwork permitting them to pass through immigration.

Many people from Myanmar live and work in Mae Sot. Some only work here, crossing the border from Myawaddy every day as migrant laborers. Many of the Myanmar immigrants in Mae Sot are of Karen ethnicity, a minority group from the eastern region of Myanmar that generally considers itself independent from Myanmar. All have come to find something that Myanmar could not offer them: jobs, safety, education. Many wish to return to Myanmar when conditions improve; others have made lives for themselves in Thailand, and still others await third-country resettlement to the U.S., Australia, and Europe.

But Mae Sot is still Thailand, and is inhabited by Thais who own shops and restaurants, run guest houses, and work for private companies as well as government positions. There are pad thai stands on every block and the occasional karaoke bar full of sex workers, for which Thailand is notorious. The Thai, Myanmar, and Karen people all cram into Mae Sot, sprinkled with expat NGO workers, to create a unique city full of opportunity and challenges. It is as difficult to explain the situation in a few short paragraphs, as it was for me to understand when I arrived in Mae Sot.

One year ago, fresh out of graduate school, I joined Global Health Access Program (GHAP), a U.S.-based NGO powered mostly by staff and volunteers in Mae Sot. At the time, I was very unfamiliar with the political situation in Myanmar, but I was compelled by the public health opportunities that GHAP would provide. With a stack of background reading in hand, I hopped on a plane to Thailand.

GHAP is a unique organization in that it isn’t an aid organization and doesn’t run its own health programs. This separates us from nearly all the NGOs here on the border, although their work is no less important. GHAP provides technical support to Myanmar and Karen community-based organizations that are located on the Thai side of the border. Some of these organizations are displaced departments of health that could no longer have central operations in Myanmar due to security problems. Others were NGOs created to target particularly vulnerable populations, where the health departments may not have access. All of these groups work tirelessly to provide healthcare to people inside Myanmar.

Myanmar is infamous in the health community for having the second worst health care system as rated by the World Health Organization, with only Sierra Leone being worse. Health statistics published by the Myanmar government are believed to be unreliable at best and blatant lies at worst.

The country has been under military rule since 1962, when the elected government was overthrown. Since then, the series of military juntas have ruled the country have been accused of being unconstitutional, committing widespread human rights violations, and violently cracking down on any one who opposes them. Even those not directly involved with opposition groups are at risk if members of those groups are associated with their village. In my time with GHAP, there have been two major military offenses on Karen villages that caused villagers to flee to makeshift refugee camps in Thailand. Some of these people may be granted official refugee status by the United Nations High Commissioner for Refugees, but most will live illegally in Thailand or will be forced to return to their burned villages.

I definitely had my work cut out for me. I was assigned to work with the malaria and tuberculosis programs with the Karen Department of Health and Welfare (KDHW), and to assist many organizations with cross-sectional surveys. Every day, including Saturdays and the occasional Sunday, I would meet or email with a member of KDHW or another organization to help local staff with any challenges they may have.

Sometimes this was correcting their English in an email to order supplies; at other times, it was teaching statistical analysis of health data using programming software. Everyone I worked with was very bright and dedicated to their work, but most had not had the education opportunities that members of GHAP have. We tried to share our knowledge and experiences in public health with them, and they shared their knowledge of the political situation and practicalities of running health programs in conflict zones.

Building a relationship with the local coordinators is essential to our success. It is easy for me to call them and tell them my ideas, but we want them to help develop the ideas themselves. Many Myanmar and Karen are by nature very shy, so I made extra effort to be friendly and accessible. Over time, they grew to trust me and instead of being afraid to call me, they would call at 7 a.m. insisting that we meet that morning. Working with the TB coordinator, whose name means “White White Flower” in her language, she would frequently reach over and hold my hand. Holding hands and touching people of the same gender is common in Karen culture, and while at first it was strange to let people into my American-sized personal bubble, soon I would reach out and hold hers too. It was a sign of the friendship we had developed.

The malaria assistant coordinator, Moo K’Paw Shee, was very new to KDHW when I first met him and did not understand the program very well and spoke English very timidly. My role was to work with him to improve the data collection and analysis for the program. At first, I would schedule meetings to teach him about the design of the database and where the information he needed was. A year later, he was overseeing data entry, modifying the database, calculating indicators from program monitoring, and even drafting donor reports in English.

He is confident in his role, and when we hold trainings for the medics who work in the clinics inside Myanmar, they joke that now they must fill out forms correctly “or Moo K’Paw Shee will yell at us.” He isn’t actually yelling, but he knows what needs to be done and how to accomplish it. I am proud of his growth over the year and that I can claim to be a small part of it, and someday I think he be a great leader for KDHW.

Many of the Myanmar and Karen people I worked with spoke little if any Thai and had had limited experience with Thai culture. Although they had lived in Mae Sot for many years, it is not always safe for them to go into town. Often we bonded over our narrow understanding of Thai language and our feelings of being outsiders. It was comforting to know that I was not the only one who was still trying to expand my cultural understandings.

I was fortunate to be able to spend more than a year learning about cultures from Thailand and Myanmar, and to have the support of the InterExchange Foundation’s Christianson Fellowship. I am still close friends with the people I worked with, and will continue to stay involved with GHAP and remain committed to improving the health situation in Myanmar. Additionally, I learned a lot about myself as I adapted and grew during my time abroad. I am grateful to the foundation for their assistance of volunteers like myself because I had an invaluable experience and hope others have too. 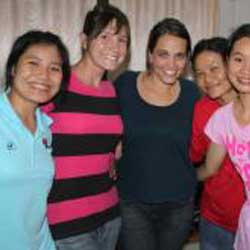 Katherine volunteered in Mae Sot, Thailand with the help of a Christianson Fellowship, from the InterExchange Foundation.