Forging Connections and Peace Through Basketball

While working with Peace Players International – Middle East and the Arab Education Institute’s Summer School of Arts and Communication in Israel and the West Bank, I explored the thorny political issues in the region and connected with the communities at the heart of these conflicts.

Through Peace Players International, an organization dedicated to peace building through basketball, I coached, refereed and engaged with over 400 Israeli and Palestinian basketball players. Participants included youth across the Jerusalem political scene, from recent Ethiopian Jewish immigrants to Arab Israeli political refugees from the Mediterranean coast.

When the school year ended in Israel and Palestine, I moved to Bethlehem to participate in basketball camps in Dheishe and Jelezon Refugee Camps, as well as in the cities of Tulkarem and Ramallah. I also taught a two-week course in English practice and journalistic methods at the Arab Education Institute’s Summer School of Arts and Communication. The course provided students an opportunity to examine the world through the lens of journalism and to improve their ability to express themselves in English.

The final course activity was a personal writing assignment fusing the journalistic lens with a personal story of importance to them. Without exception, every student wrote a short piece on their future—their dreams, their hopes and the many obstacles they face.

It was striking that no matter how hard I pushed the students to leave behind the Palestinian political situation, the occupation, and their general frustrations, these topics inevitably resurfaced. When given the opportunity to write about anything in their lives—their love for soccer, their families—every student returned with a story that dealt with the occupation, with the difficulty of achieving their dreams and the difficult relationship between their identity as Palestinians and the hard life in Palestine. In a poignant quote, one young man wrote, “I promise my dreams won’t cost the Israelis anything.”

While this class didn’t focus on sumud, or steadfastness, as an intellectual or emotional category, the students often returned to it implicitly through their writing. Their talk about persevering, about making a life in Palestine, was in equal parts to their fears for the future and what will remain with me is an under-reported part of sumud: the profuse joy of these Palestinian youngsters. While their mature appraisal of their futures puts their American counterparts to shame, their raucous laughter and strong bonds of friendship are the most powerful form of sumud, a promise to keep their intrinsic human joy alive no matter the situation.

I have read much about the Israeli-Palestinian dispute, but to understand the people—to get a feeling for the way the Israeli and Arab “streets” are reacting to the political situation—I had to engage the dispute on the same streets, in the same cafés, and, in my case, on the same basketball courts as those involved. Through the prism of my work I gained insight on issues that were inaccessible otherwise. I’m grateful to the InterExchange Foundation for supporting me on this endeavor with a Christianson Fellowship. 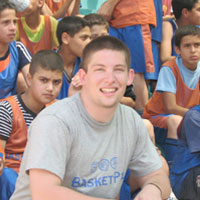 David volunteered in Israel with the help of a Christianson Fellowship, from the InterExchange Foundation.