Creating Opportunities for Refugees in Ecuador

This time, I came down with the main focus of leading mediation trainings with migrant populations in Quito, but was motivated to look deeper at how to work within the refugee community.

As I glided down into Quito, my adopted home for the next six months, the nine hours of travel gave my anxieties and insecurities time to shift toward the back of my mind, eclipsed by a wave of excitement washing over me. After all, nine months ago, I had embarked on the same journey, without the familiarity of friends or knowledge of the bustling city. My unorthodox leap from the 9-to-5 world began in November 2008, after finishing work on several senatorial campaigns out of Washington D.C. I was hit with the realization that my true interest reached farther than partisan politics studied from behind a desk.

The prospect of finding work that would make me want to get out of bed every morning compelled me to scour the internet for opportunities to go abroad and work with at-risk populations in developing countries. Given my fluency in Spanish, I was attracted to organizations in South America, and my quest ended with a volunteer position in Quito, Ecuador, which began in April 2009. With a hostel reservation and three suitcases, I embarked on the scariest journey of my life: relocating to South America with no return ticket. After navigating customs at the small international airport and collecting my bags, I was greeted by a tall British man in the midst of a crowd of smaller Ecuadorians. He was Casey, a colleague from CEMPROC, the organization I would be volunteering with. He bargained a cab fare to my hostel and, after handing me a stack of reading materials in Spanish and a map of the city at the entrance to the two-story building, left me to settle into my new home filled with tourists from across the world.

For the next three months, I stumbled through culture shock, found an apartment and roommate, investigated the struggles of the large population of Colombian refugees who have resettled in Quito, and became comfortable using the cheap public transportation system. CEMPROC had a hands-off approach to their volunteer programs, letting me create and choose projects based on my interests. While this was daunting, it allowed me to shift my focus from the high school mediation training session I helped lead my first month there to working with the growing refugee community, an issue which had sprung to the forefront of the political agenda a year earlier.

Through contacts at CEMPROC, I was invited to be part of a group working with Colombian leaders to create a refugee federation, aiming to strengthen their voice when working with state and international organizations. I used this opportunity to make contacts of my own, which turned into deeper friendships. The more time I spent with these remarkable individuals, who had been forced to flee their country and were working to make the best of their new lives, the more I wanted to help them. Ecuador is home to the largest refugee population in Latin America. Most of the refugees were Colombians, and there appeared to be no sign of an end to the civil war engulfing Colombia. While I saw much work that could be done, after three months, I could no longer afford to volunteer my time. I had embarked with few expectations, and when I returned home in August of that year, the connection I had made with this country and the people created a pull to return and continue the efforts I had started with the refugee population.

After spending several months back in the U.S., my wish to continue this endeavor was realized through the help of the Christianson Fellowship. In January of 2010, landing in the same hazy mountainous city I discovered and connected with the previous year, I quickly ordered a taxi from one of the stands at the airport and weaved my way through the busy streets to the welcoming spare room at a friend’s apartment. This time with a solid grasp of what to expect and goals for my six-month journey, I quickly reconnected with organizations and refugee leaders who I had befriended the year before.

This time, I came down with the main focus of leading mediation trainings with migrant populations in Quito, but was motivated to look deeper at how to work with in the refugee community. My focus shifted to helping create work opportunities for the hardworking population. I worked closely with the refugee federation and FAS, a branch of the United Nations High Commission on Refugees (UNHCR) to enable this vision. With their help, I reached out to artisans and local vendors with the hope of forming an artisan cooperative that could support each other while providing participants with an income to supply food and shelter for them and their families. I knew this would not be an easy endeavor but I was not prepared for the numerous obstacles and setbacks I encountered.

Nothing went as planned, but I learned to adapt to cultural differences, such as people showing up an hour late for meetings without informing me, or at times just not coming at all. As a young foreign woman (or “gringa” as they call me) with a heavy American accent, I became accustomed to having to prove myself as capable. I continually had to veer off course to accommodate setbacks, keeping my ultimate goals of creating sustainable opportunities for the refugees as my guide. CEMPROC continued to help me through the process and, after realizing that six months is not sufficient time to plan and put into practice a well-run cooperative, I was able to fuse the group of refugee artisans with a group of Ecuadorians who already had some structure and similar values of working with underserved populations. The group makes bags, jewelry, and clothing out of recycled materials such as orange peels, scrap fabric, and seeds. This symbiotic partnership between the refugees and Ecuadorians provides a forum for the groups to share knowledge and learn from each other as well, which is not common in a society that discriminates based on citizenship.

Trying to make the most of my short time down there, I continually looked for ways to do more with any free time I had after work. Using feedback from refugees and friends who work at aid organizations, I saw a need for English classes. While I had originally traveled down to lead mediation classes, space limitations delayed the start, and gave me time to adjust the curriculum to shift the focus to teaching English, using mediation skills as class themes. The classes now cater to 20 refugees per semester and provide them with basic English skills to help them with their jobs and the possibility of settling in a non-Spanish speaking country.

I left Ecuador with a new understanding of how immigration affects families and individuals and a new perspective on my own life and personal values. I saw a group of people who had been forced to leave everything they knew to save their lives, and made a conscious decision to make the best of their new situation. I heard stories of unimaginable cruelty, but what stuck out was their perseverance in the face of adversity. My experience not only opened my eyes to the reality of displaced people, but also opened me up to a new culture and a new set of values that places family above financial success. The Christianson Fellowship helped spark a passion in me, inspiring me to work as part of the support network for these displaced refugees, with the hope of helping them find some stability in their lives.

I am continuing to work with a group of artisans, helping them reach out to venues in Quito and develop their products so that hopefully one day they will be able to export their handmade products to the United States. I have started market studies at small artisan fairs and am working on a website for the group. Without support from the Christianson Fellowship, none of this would have been possible. 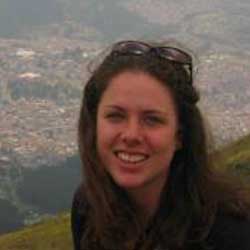 Emily volunteered in Quito, Ecuador with the help of a Christianson Fellowship, from the InterExchange Foundation.