How to implement a culturally sensitive health education program in Myanmar

While volunteering with Burma Children Medical Fund (BCMF]—a community-based, health organization in Mae Sot, Thailand—in 2016-2017, the organization received a sizable donation of reusable sanitary pads to distribute to remote villages in Karen State, Myanmar. There was no plan in place to train the target population on pad usage, though.

After interviewing numerous patients during my first volunteer stint, I learned that many had no understanding of their anatomy and physiology and, as a result, often suffered from preventable conditions. Given this, I proposed that BCMF develop and teach sexual and reproductive health workshops to women and girls in these villages. With the support of a Christianson Fellowship from the InterExchange Foundation, I returned to Thailand and successfully planned and implemented this culturally sensitive and sustainable sexual and reproductive health education program.

After interviewing numerous patients during my first volunteer stint, I learned that many had no understanding of their anatomy and physiology and, as a result, often suffered from preventable conditions. Given this, I proposed that BCMF develop and teach sexual and reproductive health workshops to women and girls in these villages. With the support of a [Christianson Fellowship](/foundation/christianson-fellowship/) from the [InterExchange Foundation](/foundation/), I returned to Thailand and successfully planned and implemented this culturally sensitive and sustainable sexual and reproductive health education program.

Providing access to medical care in a resource-deprived region

BCMF is a community-based, health organization in Mae Sot, Thailand. Mae Sot is a small city on the Thai-Myanmar border with a diverse population of Thais, numerous ethnicities from Myanmar, and international humanitarian aid workers. Due to the long and ongoing armed conflict throughout Myanmar, particularly in Karen State (which shares a border with Mae Sot), a large number of people have fled Myanmar to Thailand.

There are nine refugee camps in Thailand along the border with Myanmar, several of which are in the same province as Mae Sot. Over time, Mae Sot has become a center for trade, as well as a hotspot for refugees and economic migrants from Myanmar.

BCMF facilitates access to advanced medical care, such as surgery, which local, low-resource clinics are unable to provide. Their patient population is comprised of refugees, migrants, and others who cannot access medical care in their home country of Myanmar. BCMF’s programs have expanded to include capacity-building and health education components. 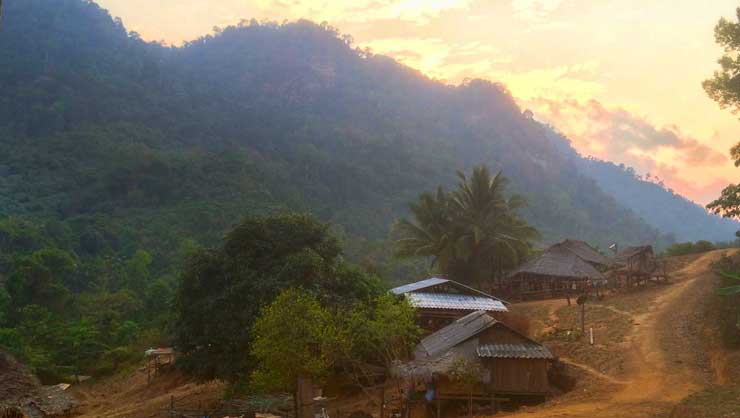 Rural village on Thai-Myanmar border. Image courtesy of Phoebe B.

I collaborated with a team of locals and international volunteers to plan and implement all aspects of the project. The core team consisted of myself and two locally hired Project Officers—one with a medical background and one with a training background.

While developing the materials, I consulted my colleagues to ensure they were culturally appropriate and contextually applicable. For example, because we were working in areas and with cultures in which talking about one’s body, particularly reproductive parts, is rare, we developed a fun ice-breaker for workshops in which participants introduced themselves by naming their favorite body part. While many participants were quite shy during this activity, it set them on a path to being more comfortable so that by the time we were discussing safe sex, many women joined the conversation. 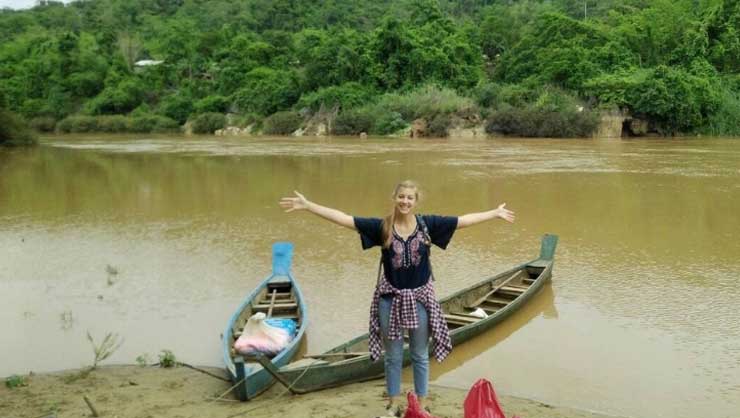 Phoebe with workshop supplies before crossing a river to get to the training location. Image courtesy of Phoebe B.

Our team translated all the materials into both Karen and Burmese since our target populations spoke one of those two languages.

The most rewarding part of my second, 6-month volunteer stint with BCMF was co-leading sexual and reproductive health workshops in rural and remote areas of Myanmar. These workshops gave me the chance to meet and work with many remarkable girls and women, and to hear their stories. 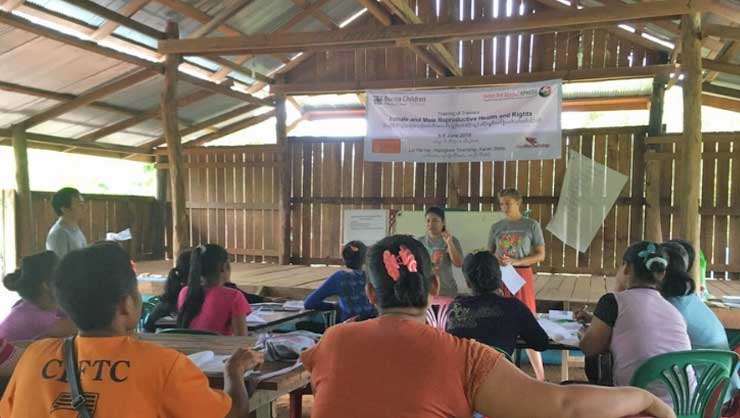 Co-leading a workshop in rural Myanmar. Image courtesy of Phoebe B.

A major piece of the workshops involved training on and distribution of reusable sanitary pad kits. The kits equip a female with all of the materials she needs to manage her menstruation, including fabric shields which snap onto underwear, liners which can be replaced every couple of hours, underwear, and soap for washing the pads. 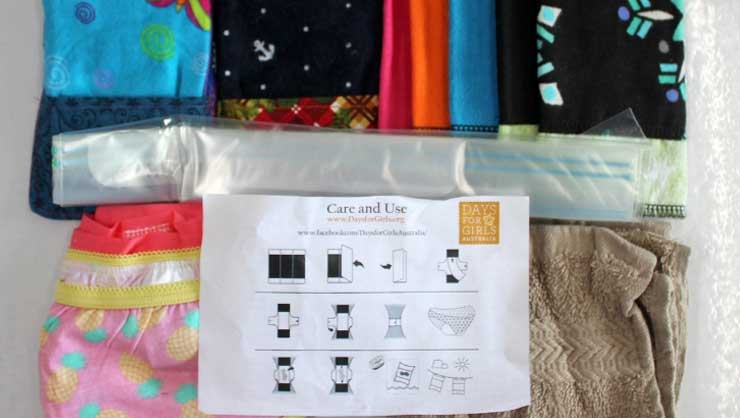 Many of the women who participated in the workshops had never used pads to manage their menstruation; they never had access. Some women always used their longyi (a sarong-like skirt) rotating and wrapping it in a different way each time they bled through the fabric.

In one area, those who did use disposable pads reported only being able to buy them in a town in Thailand, which was a two-hour walk away. In addition to the time commitment of traveling there and back, they had to pay up to 100 Thai Baht (approximately USD $3) for enough pads for the length of one period. For women who were subsistence farmers and had no cash income this was a significant drain on their limited resources, as they had to sell something to get the cash required. Additionally, some women shared that they had to ask their male relatives to buy the pads for them when they went to town, which could be embarrassing and hard to justify with their limited means.

I heard similar stories in the past, but at that time they were about people far away from my reality. This time it was real. It was present. It was in my face. I had driven the dirt mountain road they have to walk to get to that Thai town. I’d seen women re-adjusting their red “period longyi” during workshops. I saw these women’s homes and knew their resources were severely limited. 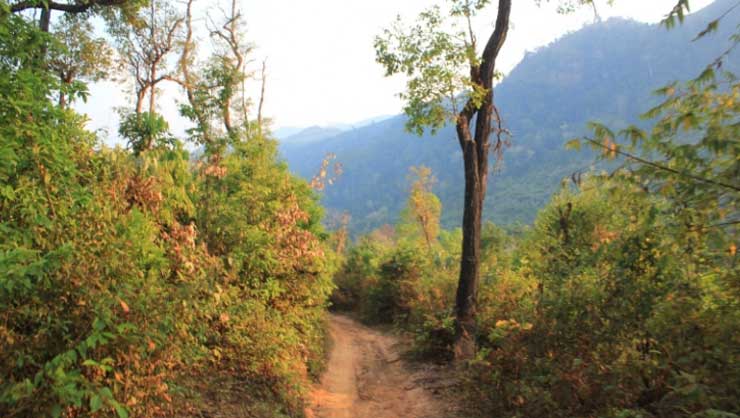 Mountain road in Thailand. Image courtesy of Phoebe B.

I felt a mixture of emotions—anger that women’s needs are often put last, inspiration at their alternative management methods, and awe that they just did what they had to do, and accepted it (for the most part).

And then I thought, who am I to say that these fabric pads are a better option for them when they have been managing for centuries in their own ways?

I still believe the reusable pads are beneficial—practically, environmentally, and financially—but after this experience, I feel that instead of solving a problem, the pads were bringing up questions.

All in all, though, there was strong participation in the workshops and many participants, who had limited schooling, were enthralled with the material.

In order to adapt and refine the workshop materials, we held post-workshop focus group discussions (FGD) with a diverse sample of participants. In these FDGs, we asked participants for feedback: What did they like/not like? How can we improve? Additionally, BCMF asked questions to better understand the local context and inform future activities: Did their parents or caretakers talk to them about reproductive health? What did they use for menstrual hygiene management?

Our Training of Trainers (TOT) program built off of the workshop material with the aim of giving teachers and village health workers the knowledge, skills, and tools necessary to conduct the workshops in their respective communities and villages. 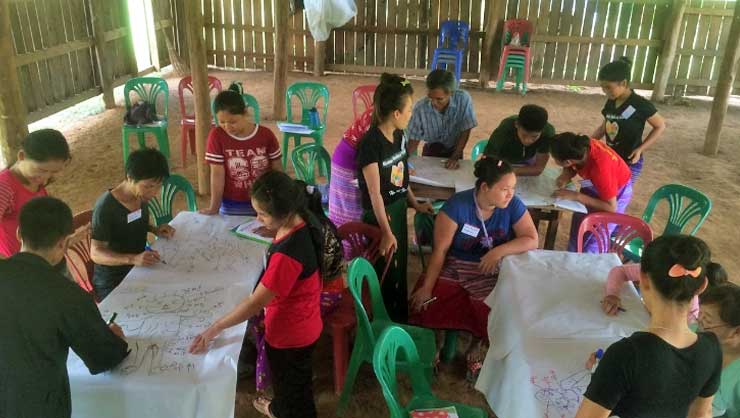 Workshop activity: Participants label parts of the female body that change during puberty. Image courtesy of Phoebe B.

Overall, the experience of planning and implementing this project and returning to Mae Sot was life-changing and a wonderful learning experience. I connected with the community more, especially my colleagues. What I contributed to the organization’s operations pales in comparison to what I learned and received in return.

I would like to sincerely thank the InterExchange Foundation for supporting me through the Christianson Fellowship and giving me the opportunity to work with BCMF and the people of Thailand and Burma. 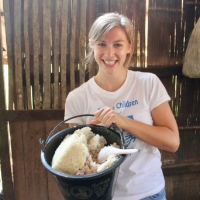 Phoebe volunteered in Thailand with the help of a Christianson Fellowship, from the InterExchange Foundation.