I have always been interested in Asia, and I have also always been fascinated by sciences of all kinds. In college I chose to major in neuroscience and took all the required pre-medicine courses. During my sophomore year, I decided to fulfill my general education course requirements with Chinese.

When I had to decide where to spend my junior year abroad, I decided to go to the Yunnan province located in southwestern China. During my time abroad, I focused on perfecting my Mandarin, learning about Chinese culture, and visiting local clinics and hospitals. Every herbal remedy, run-down hospital, and person on the street with an IV bag hanging from a tree further propelled my interests.

In order to investigate the interplay of traditional Chinese medicine and Western medicine, I also interned in a Western-style hospital in Kunming. After my time in China, I knew wanted to come back to Yunnan and work with those in need; the InterExchange Foundation gave me that chance. The Christianson Fellowship provided me with the necessary funds to volunteer with a nonprofit organization, Population Services International in Yunnan.

Over 2,000 kilometers from Beijing, Yunnan is far from most Americans’ idea of China. It is known for being home to 26 of China’s 56 ethnic minorities. The diverse countryside varies from towering snow-capped peaks in the northwest, to tropical rain forests in the south. While the nature is notably picturesque and the culture vibrant, Yunnan’s proximity to Southeast Asia’s golden triangle means a large influx of drugs, prostitution, gambling, and disease. The majority of people in Yunnan are farmers and have little access to basic education and health care.

I began my work in Kunming, the capital of Yunnan, at PSI’s main office in China. In Yunnan, PSI runs programs to combat the spread of HIV and malaria. PSI’s HIV programs target drug users and female sex workers in a number of high-risk areas around Yunnan.

A considerable portion of my time was spent planning and conducting behavior change interventions, mainly with at-risk youth. An integral part of these programs was to dispense HIV prevention packets containing condoms and information regarding HIV-testing sites and how to obtain medical treatment and medicine. It was an amazing experience knowing I was making a difference and doing exactly what I had wanted to do.

While in Kunming I had the chance to volunteer with other medical nonprofit organizations. One ran trips to local leprosy villages. Touring foreigners would pay for medications and doctors and then visit the villages to help out in any way they could. I was lucky enough to accompany them to learn more about the medicine in rural Asia and act as a translator.

In China, if people are found to have had leprosy, even if their bodies have been rid of the bacteria for decades, they are forced to live confined in a leprosy village for the rest of their lives. Many suffer extreme pain in their joints, and almost all have one or more visual problems, not to mention the typical conditions of an aging person. In the villages I worked in the fields, dispensed medications, dressed wounds, and occasionally performed acupuncture.

One particular case touched me deeply. We came across a young boy, Xiao Bai, with congenital heart disease. It seemed to be repairable with a simple surgery to place a shunt in his heart, so he was recommended to come to Kunming for the procedure, all expenses paid. He was transported to a hospital in Kunming for a preliminary procedure to better visualize his condition. It was then realized that Xiao Bai’s problem was much more severe than previously thought. His heart was malformed in such a way that it was not reparable, at least in Yunnan, if not in the world.

There was nothing we could do. We had told his family to come to Kunming because we could help, we could give him a chance to live. Then after two painful and invasive procedures we could only send him home with nothing more than some medication for the pain. Standing there with the bag of walnuts his family brought as a gift of thanks, looking at this happy, unknowing child, was almost more than I could bear. But in the end, for every one Xiao Bai, there were ten children we did help, who will go on to live healthy lives, and that made it worthwhile.

After working in Kunming for a few months I was overjoyed at the chance to move to a rural town 12 hours away from the big city. My new home was in an autonomous county on the border with Myanmar, where there is even less access to medical care than in most of Yunnan. The border crossing with Myanmar is a hotspot for drug trafficking, migrant workers, prostitution, and gambling, which cause an elevated rate of HIV infection.

In the rural town, living among minorities was a completely different experience than living in the city of Kunming. Between February and May there are a series of holidays celebrated by the different Chinese ethnic minorities, each a community event. The most memorable was the white pagoda festival. This is a three-day ethnic minority festival mixing Buddhism and ancestor worship. There are elephant and llama floats, men beating drums and dancing with sticks, and people of all ages wearing their traditional dress. Throughout the forest surrounding the pagoda, outside the ring of marching people, families set up small tables and squat chairs under tarps strung between the trees. People migrate from table to table, eating and drinking with family and friends. For the first time I felt as though I truly blended in and was a part of a community, and not thought of as “that foreigner.”

My time volunteering in China helped me clarify my future career plans. While abroad I perfected my Mandarin skills, learned more about the implementation of medicine in a hospital and in the field, as well as what it takes to successfully run an organization. Prior to volunteering with PSI, I had planned on practicing medicine in Asia to continue my goal of providing better medical care to those in need. While I still wish to practice medicine, I now intend to pursue a degree in health care management. I want to find out what makes people sick, and how to change that. The InterExchange Christianson Fellowship helped to teach me that. 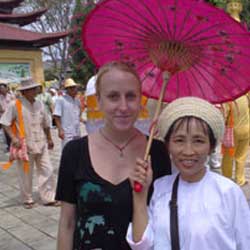 Jennifer volunteered in Kunming, Yunnan, China with the help of a Christianson Fellowship, from the InterExchange Foundation.