I left a year ago for a year-long, unpaid internship with Apne Aap Women Worldwide, an Indian anti-sex trafficking organization, full of excitement, drive, and uncertainty about what this year would teach me. I had been to India twice before and each time, its “charm” had captured me. I wanted to commit to a full working year to benefit myself, give back to an organization, and more importantly, help educate my family back home.

My parents have never been out of the States and they viewed India as a dangerous place to live and work. But to me, I had experienced the most kindred of hearts in India. I wanted my parents to learn about Hindustan culture through my eyes. Thus began my year-long internship.

Apne Aap is a small grassroots organization that works in Kolkata, Bihar, and New Delhi. Because of Nicholas Kristoff and Sheryl WuDunn’s book, Half the Sky, the organization has received a lot of media attention. I worked in the head office in New Delhi. Many interns - myself included - starting at this well-known NGO expect it to be just like working in America. The truth is, working in India is much different.

For example, work here starts at 9:30 a.m., but only new interns in their first week show up at that time. Everyone else comes in a half an hour later, at the earliest. There is a constant lateness that took me a few months to get used to. Now, a year later, I run only on “Indian standard time.” I don’t expect meetings set for 11 a.m. to start until at least 11:30 a.m.

Mai bhuki hu mujhe khana hai abhi, meaning, “I am hungry, I want to eat now,” was my first full sentence spoken in Hindi. Sharing a meal, even in a working environment, is important. The whole office shares food and drink over lunch. It is very common for someone to just reach over and take food from your plate during lunch. And it is usually over a cup of chai or during lunch where relationships are formed that lead to work being done. More deeply, it shows the importance of community in India, which is much more prominent than in the West. Here, the social structure is based on kinship and family relationships.

After six months of working in the head office, I got to work in the field office in Najafagarh, Delhi. I started working with our Livelihood Program Officer to help develop an income-generation program that would create an alternate, sustainable means to prostitution through making and marketing handicrafts.

This completely changed my internship experience. I started interviewing the women and girls we work with directly. I went into their homes. I attended their weddings, got to know their families and communities. They took me in with open hearts and changed my life here for the better. My family, who was once opposed to me being in India, has become very supportive and my work here. They have even become open to the idea of traveling outside the United States. I am excited to return home and share my experiences and stories with them even more now.

It’s impossible to sum up all of my experiences in a short form. To simply say, “This was the best year of my life” is too generic, but also completely true. I am forever changed by the people I met, the challenges I faced, and the places I went to. The images and faces will always be with me, inspiring me. This year would not have been possible without the InterExchange Foundation Christianson Fellowship. It’s given me the financial opportunity to grow in ways that I never would have been able to. I could have never been able to complete this year without this grant.

I am going back to my country now full of cultural awareness and a realization that it is impossible to learn everything from a classroom setting. I am armed with passion and drive to continue marketing this income-generation project stateside. I feel that this is just the beginning of a new chapter. I urge anyone who is faced with a choice to travel, whether it is for an internship or for pleasure, to do so. Whatever the excuses may be, ignore them all and go! It will be the best decision of your life. 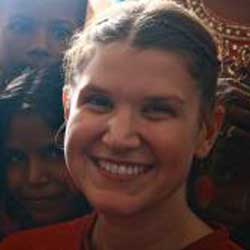 Kristin volunteered in New Delhi, India with the help of a Christianson Fellowship, from the InterExchange Foundation.