After nearly 30 hours of travel time, my plane finally landed in the city I have come to call my home for the last year - Kigali, Rwanda. I stepped off the plane and was greeted by the muggy evening air, a welcome change from the winter weather I left behind in Omaha, Nebraska. At the airport, I was met by the Programs Manager of Generation Rwanda, the organization I would be working with for the year. She took me to my home and gave me a brief tour. There was the living room, basic kitchen, five bedrooms, and two bathrooms. Apparently the organization had upgraded to a new house last month and while these bathrooms still did not have warm water, I was told I should consider myself lucky that water actually came out of the showerhead, even if it did only come every few days.

After dropping off my luggage at the house, we went to the 24-hour store to pick up the essentials: toilet paper, cereal, and water, as my Kigali-veteran roommates would not be returning to show me the ropes for another few days. Luckily, they had left their two adopted Rwandan dogs behind to keep me company in our empty five-bedroom house! The following days were a blur of jet lag, dog sitting, and an attempt to learn the layout of my neighborhood. I lived in Nyamirambo, which is marked by the “big green mosque” and known for being one of the more vibrant neighborhoods in Kigali. All of this downtime left me with plenty of opportunities to reflect on why I had decided to come back to Rwanda to work at an unpaid position.

I had originally come to Rwanda for a couple of weeks to study in 2009 and since then had been eager to return to live and work. However, when I finally graduated from college, I was offered a paying position with an organization in Omaha. Despite my attempts to find paid work in Rwanda, it became evident that the only way I could return was through an unpaid internship. Financially, I was in no position to turn down a job, but having lived in Nebraska my whole life, I knew it was time for a change. So I took a risk, turned down the job offer, and started researching organizations in Rwanda.

About a month into searching, I came across Generation Rwanda. Generation Rwanda was originally founded to provide university scholarships for orphans. However, it has evolved into a holistic scholarship program and now accepts applications from any student that proves they come from a vulnerable background. A student in our program not only receives a scholarship to attend university, but housing near their university, a monthly living stipend, health care services, and access to all of Generation Rwanda’s supplemental programs. These programs include career development, English-language training, leadership training, entrepreneurship training, health workshops, and student clubs. Through the scholarship program and additional trainings, Generation Rwanda hopes to create a future generation of leaders and intellectuals who can make a positive contribution to Rwanda and Africa as a whole. The organization seemed like a perfect fit! It fulfilled my most important criteria of being based in Rwanda and also aligned with my skill-set and background in education.

After breaking out of my jetlagged haze, I began learning more about what my role at Generation Rwanda would be. My primary focus would be working on GR’s Language Program. In 2008 the Rwandan Government changed the language of instruction in schools from French to English. As a result, one of the programs we offer is English Language Training with the hope that our students will be fluent in English by the time they graduate from university. Our Language Program, like the school year, is divided into two terms running from September to December, with a break for holidays, and from January to May. During those months I taught and helped design the English curriculum for three language levels: intermediate, high intermediate, and advanced.

In addition to teaching English, at the end of February I had the opportunity to participate in Generation Rwanda’s first Women’s Empowerment event, which was organized by the student club WeCan Women’s Network and the club’s advisor. The event aimed to facilitate a discussion between Generation Rwanda’s female students and local female leaders from around Kigali on the topic, “How are you empowered?” Rather than holding a conversation about how to be empowered, this event focused on what traits and qualities our students already possess that make them empowered.

About a month after working with Generation Rwanda, we began our new student application process. Unlike admissions into other universities and scholarship programs in Rwanda, which rely solely on standardized tests, Generation Rwanda takes a more comprehensive approach to their admissions process. Generation Rwanda looks for well-rounded students who not only perform well in school, but also demonstrate their abilities through extracurricular activities, personal essays, and their potential to be a future leader in their field of study. This year we received over 4,000 applications for around 30 positions in our program. Given the high volume of applicants, every staff member was involved in the selection process. During the month of February, if I wasn’t busy planning or implementing lessons, I was either entering data from applications or reading personal essays. Only 500 applicants made it to the second round and from there we selected around 100 students to interview during the third round. By May we made our final selection and welcomed 27 new students into our program.

Once the selection process was complete, our students spent a week in New Student Orientation, where they were given the skills and tools they need to excel at university and within our scholarship program. After orientation, students were required to spend ten weeks in intensive language and computer training. I spent the months of June, July, and August teaching English daily to 15 of our new students. As long as those days felt, it was an incredible opportunity to get to know the new students and see them grow as individuals.

As my time in Rwanda comes to a close, it’s difficult to leave behind my work, GR students, co-workers, friends, and all of the amazing opportunities and experiences I have had here. On a personal level, some of my favorite memories of Rwanda will be sailing down Lake Kivu, exploring Kigali with friends, gorilla trekking, and hiking up and down Rwanda’s endless hills. On a professional level, I will miss sharing an office with six of my co-workers, debating current events with students, and my favorite, attending graduation parties.

I was fortunate enough to attend one final graduation party before I left Rwanda. I was invited to share lunch, a Fanta, and to give a speech in front of friends and family about all of the amazing accomplishments our student had made in the past four years. Graduation serves as a reminder for us all at GR that the time and effort we put in each day is for our students to fulfill a dream that many of their peers are unable to achieve, which is to receive a college education so they are able to build a brighter future for themselves and their country. Thanks to InterExchange Foundation and the Christianson Grant for giving me the opportunity to witness first had the amazing impact a college education can have on the youth and the development of Rwanda. 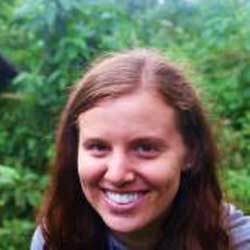 Leslie volunteered in Kigali, Rwanda with the help of a Christianson Grant, from the InterExchange Foundation.