How can we improve maternal and child health in Carabayllo, Peru?

In Lima, Peru, as in many other parts of the world, the stigma associated with mental health often leads to neglect. In the district of Carabayllo where the prevalence of perinatal depression is 40%, Socios En Salud (SES) an international subsidiary of the U.S.-based global health NGO, Partners in Health (PiH), is working to uplift mothers.

Read on to learn more about this area and the initiatives to improve the health and social welfare of mothers.

Read on to learn more about this area and the initiatives to improve the health and social welfare of mothers.

Carabayllo: My home for the next eight months

Costa (coast), sierra (highlands), and selva (jungle): three distinct landscapes divide Peru into zones of rich, geographic, and cultural diversity. Between the coastal city of Lima and the Andean sierra lies El Cono Norte, the Northern Cone of a bustling metropolis. Tracing Avenida Tupác Amaru, one of the city’s major roads, through a sea of bumper-to-bumper traffic, I watch as the manicured landscapes of central Lima fall away. In the flurry of dust emerges Carabayllo, the city’s largest district and the site of my volunteer work with SES. 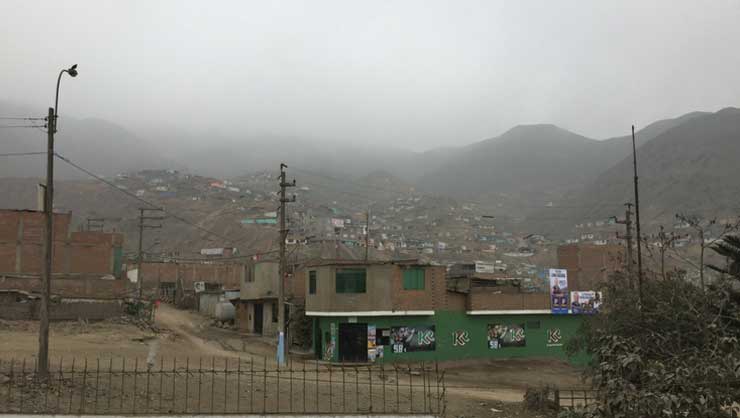 PiH centers its mission on providing a “preferential option” for society’s most vulnerable. Resting on the outskirts of metropolitan Lima, Carabayllo is home to the city’s poorest residents, many of whom settled here after fleeing political violence during the 1980s and 1990s. Here, the cerros (hills) stretch high into the sky, dotted with tin roofs and spanned by endless staircases that connect homes to the main streets below.

With limited health care resources and infrastructure, the district has faced major public health threats in the past several decades, including one of the highest burdens of multidrug-resistant tuberculosis (MDR-TB) globally. Since its founding in 1996, SES has maintained a strong relationship with the municipal government of Carabayllo, along with Peru’s Ministry of Health, helping dramatically lower rates of MDR-TB by providing treatments and training community health workers in the region.

While largely known for its success in battling TB, SES has also established its local presence in other areas of public health. In 2016, the organization launched its Salud Materno Infantil (SAMI) program, focused on issues of maternal and child health. Since moving to Lima and joining the SAMI team earlier this month, I’ve become closely involved with a project that aims to strengthen the mother-child binomial during pregnancy through clinical, nutritional, and psycho-social interventions. Called SANAME (Salud y Nutrición de Mujeres Embarazada), this prospective cohort study has enrolled 120 pregnant women in Carabayllo since it launched last year, with plans to continue into this fall. 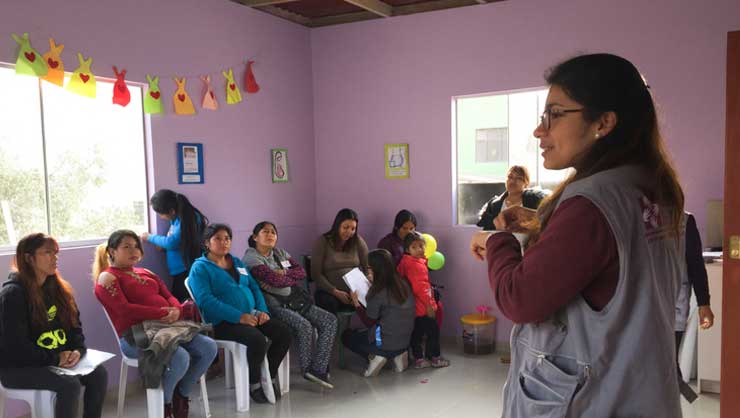 Andrea, a nutritionist at SES, leads a workshop on personal hygiene for expecting mothers. Image courtesy of Minnie Jang

Examples of interventions include nutritional workshops that encourage iron-rich diets in order to prevent anemia, a top public health priority in Peru. Some women in SANAME are also referred to another SES program, known as Pensamientos Saludables (Healthy Thoughts), an initiative that provides cognitive behavioral therapy sessions for women suffering from perinatal depression. In addition to emotional support during pregnancy, SANAME attempts to directly promote the social welfare of women through weaving and knitting workshops, teaching skills that will translate into generated income. 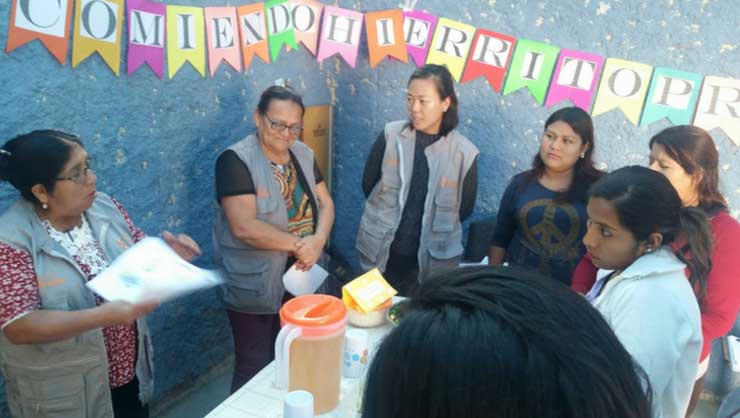 Insights from week three on the ground

In my short time here thus far, I’ve been fortunate to interface with various members of the Carabayllo community while attending workshops at local health posts and joining community health agents in their day-to-day tasks. Through such experiences, I’ve witnessed the notion of “accompaniment,” a cornerstone of SES’s community-based model, come to life. A key feature of nearly every program at SES is the involvement of local community health agents (CHAs), who are trained to deliver quality, inexpensive health care for patients. After meeting a handful of CHAs and observing the relationships formed with women in their own communities, I have a better understanding of the strength of communal networks in holistic approaches to health. 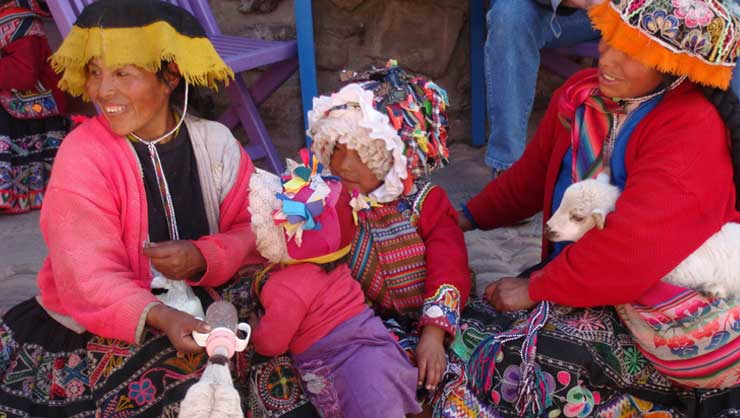 Over the past several weeks, I’ve also begun to grasp the culturally specific dynamics of providing care to women in this local context. Here in Carabayllo, where ethnic roots run deep into indigenous, Andean heritage, some women have inherited generational beliefs from their mothers and grandmothers regarding pregnancy. At one workshop, a young mother explained that she had not been attending SANAME knitting workshops because she was told that knitting during pregnancy would cause her unborn fetus to be strangled by her umbilical cord. 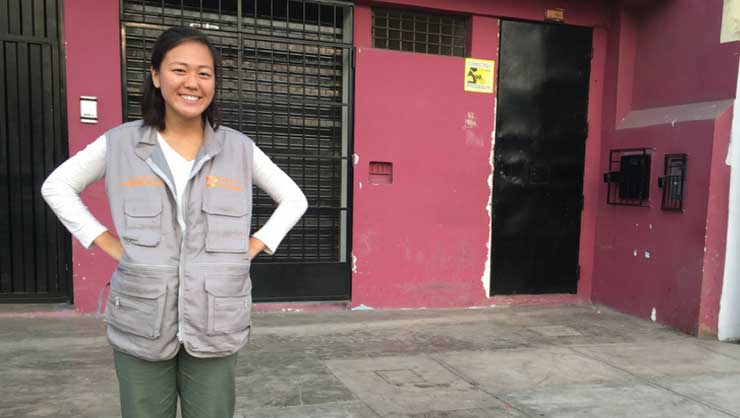 In front of my office in Comas, a district of Lima, Peru. Image courtesy of Minnie Jang

Speaking with a colleague from SES after the workshop, I learned that locally held beliefs can create certain barriers to the implementation of more evidence-based interventions in Carabayllo. Striking a balance between respect for local customs and the promotion of science-based solutions is a precarious task. Looking towards a future career in medicine and with a vigilant eye towards my position as a foreigner in this current context, I hope to continue evolving my concept of cultural competence alongside members of the SES and Carabayllo communities.

As the year progresses, I’m eager to expand upon these reflections on health care in low-resource settings, community-based models, and the need for local and cultural specificity in every public health intervention. Meanwhile, I’m also excited to continue assisting the processes of data entry and analysis at SES, helping monitor and evaluate the SANAME program until its conclusion. With gratitude for the InterExchange Christianson Fellowship and its generous support of this volunteer opportunity, I charge onward in pursuit of our creed here at SES: La salud es un derecho humano (health is a human right). 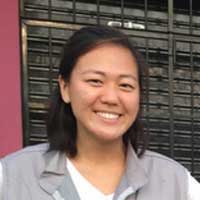 Minnie volunteered in Peru with the help of a Christianson Fellowship, from the InterExchange Foundation.