Planting Seeds of Sustainability in Ecuador

This exchange of ideas, beliefs, cultures, stories, hugs, laughs, tears, awkward moments and lives was the most important element of my experience in Ecuador and something that I will never forget.

I came across Foundation Human Nature (FHN), a small nonprofit organization that had constructed a health center in La Y de la Laguna, a remote jungle town in Ecuador. I sent in an application and FHN accepted me as a conservation volunteer working in environmental conservation and education.

In order to get to La Y de la Laguna one must take a ranchera, a big truck with six or seven rows of benches, from the coastal city of Quinindé. From Quinindé the ranchera makes its one and a half hour journey adentro on bumpy, uneven gravel roads passing through mountainous jungle peppered with cows, palma Africana, cacao, and platano.

You quickly begin to understand that these crops and livestock are the backbone of the local economy. Arriving in La Y you are welcomed by a small plaza surrounded by about fifteen small houses, a couple of stores, and lots of mangy-looking dogs. The health center or Subcentro de Salud offers the services of a doctor, nurse, dentist, auxiliary, and lab technician all without cost.

After taking a couple of days to adjust to my new surroundings, it became apparent that no one at the Subcentro had any idea about the projects I was supposed to be working on. I decided that if nobody could tell me what I was supposed to be doing then I would have to improvise.

I decided on converting a piece of overgrown land into an organic fruit and vegetable garden, the products of which the Subcentro could use in the future. This turned out to be the most enjoyable project I have undertaken during my six months here and one from which I have learned much about agriculture. After clearing the piece of land with a machete and constructing a fence, I was ready to plant, but it soon became apparent we would have to collect fertile soil from the laguna as the existing soil was very dry and lacking in nutrients. I set a date with Joanna, another volunteer, and some other community members to collect dirt. Unfortunately, every time Joanna and I set a date and time with various people who offered to help us, only one person would show up.

With much trial and tribulation, Joanna and I eventually managed to collect sixty sacks of rich, fertile soil and I was able to begin planting. Now we have small crops of tomatoes, cucumbers, peppers and have recently planted haba (a type of bean) and papaya. I have also implemented two organic compost systems, one which utilizes the organic waste that we produce in the kitchen and another which utilizes cow excrement to make fertilizer. The fruit and vegetables we grow go directly to the the personnel of the Subcentro, thereby making the Subcentro more sustainable. The garden also provides an example of organic agriculture and products that people do not typically grow at home.

In an effort to combat to educate the local community about the benefits of organic farming, we initiated a joint project with the Kaiman Foundation, also in La Y that works on reforestation and environmental conservation, to form huertos escolares or organic vegetable gardens in the local grade school.

The philosophy behind the project is that the children, the next generation of La Y, will learn to cultivate plants in a way that is environmentally friendly and sustainable. In addition, the products from the garden will be used to supplement the school lunch, which is usually prepared with canned and dry foods provided by the government. The huertos escolares project has been extremely successful as far as participation from the community. At every minga, meetings to build a fence, weed the area, collect fertile soil, and make platabandas (raised beds full of fertile soil), there was good attendance and participation.

I personally have come to appreciate the value of agricultural labor through the local example of cacao. The region in which La Y is located presents the perfect climate for the cultivation of cacao and, unsurprisingly, cacao is for many their main source of income. I had the opportunity to learn about and harvest cacao with Don Milton Gomez in Sabeleta, about two hours on foot from La Y. He lives in a simple wooden house with his wife and seven children and is a subsistence farmer. Don Milton has about six hectares of land where he has planted cacao.

Once the cacao seeds are harvested and dried, they are ready to be transported to an intermediary in Quinindé who then transports the seeds to Quito or Guayaquil where they will either be used to make chocolate or exported to Europe or the U.S. Don Milton can sell a quintal, or 100 pounds, of dry cacao in Quinindé for about $90. He sells approximately 60 quintales each year. Out of his earnings, he pays five workers per hectare to clean around the trees at least twice a year, pay for transportation to Quinindé and general maintenance and cultivation costs.

Don Milton makes enough money to support his family but he told me, “Es solo para sobrevivr” or it is basically just enough to survive. Those who see the real profit from cacao are the big businesses in Quito, Guayaquil, Europe, or the U.S. who receive the seeds and produce chocolate. My time with Don Milton made me realize the incredible amount of labor that goes into a bar of chocolate, something we in the U.S. take for granted as a readily available and relatively cheap product. Now whenever I enjoy a chocolate treat, I will remember and be grateful for farmers like Don Milton,.

My most memorable experiences from La Y were from traveling with friends, like Don Milton, to their communities further into the jungle, and spending time with them and their families. The communities “mas adentro” or further in the jungle, do not have electricity, the closest store is probably an hour or more away, and streams, rivers or rain are the only sources of water.

The people are typically subsistence farmers who generate capital by growing cacao or raising cattle or pigs. Spending a week or so with a family in one of these communities is an amazing experience as you realize that whatever environment or conditions humans find themselves in they will find a way to survive and innovate systems to get the best out of the little they have. I truly admire this way of life, especially coming from New York City where practically everything is at hands reach, as these people live simply, in harmony with nature, taking what they need to survive but nothing more. They hardly produce waste or contaminate the environment and use the few commodities they own until they simply do not work anymore.

Of course, life in the campo is not without its problems. Access to education is poor and the quality of education extremely low. Illiteracy is a common problem and people who read books outside of the classroom setting are practically nonexistent. The education system in no way cultivates creativity or critical thinking. Many young men and women never finish high school because their families need them to work on the farm or in the house.

Those that do finish high school attend a distancia, meaning they only attend classes one or two days of the week. Proper nutrition can be a problem as alimentation is based on what is immediately available and meals often consist of big portions of rice or platano with a small portion of protein or vegetables. Inequality between men and women is alarming, with few women working outside of the home. Physical and mental abuse of women is extremely common. Alcoholism is also common and contributes to maltreatment of women and other family members. It is not uncommon for girls between 12 and 16 years old to be married off to much older men and to have their first child at this age.

This is where, for me, the cultural and international exchange that we were undertaking was most important. I was able to share with people in La Y my thoughts and beliefs about issues such as gender equality, women’s reproductive rights, education, and HIV/AIDS and present a point of view that was distinct from theirs. Through these conversations I came to understand so much about a culture that is completely different to mine, directly from the mouths of the people who represent the heart and soul of this pueblito. I believe the people from the La Y with whom I spoke about these issues also came to understand me better and understand where I was coming from. Even through there were many things we did not agree on, the most important fact was that we were crossing cultural and social boundaries in order to share with each other and create understanding across international borders. This exchange of ideas, beliefs, cultures, stories, hugs, laughs, tears, awkward moments and lives was the most important element of my experience in Ecuador and something that I will never forget. From the bottom of my heart I would like to thank the InterExchange Foundation and the Christianson Fellowship for supporting me in this experience. I have come back a different person. 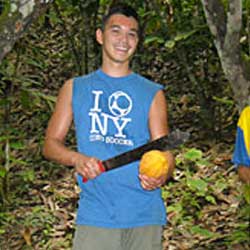 Kenta volunteered in Kibale National Park, Uganda with the help of a Christianson Fellowship, from the InterExchange Foundation.