My time as an intern with CHF International, in many ways, was riddled with the unexpected challenges of this type of work. Over the past nine months I faced typical project challenges - due dates, management challenges, reports – but the less expected challenges were where the real lessons were learned, and ultimately where the true strength of this experience lay.

An EU Project in Pune

The original plan to work on a European Union-funded biogas in slums project had some bumps. Money, which had been sent to begin the project, got stuck in the inefficient and often corrupt local government. My program manager and I spent countless hours in the local governing body offices arguing with officials to release the funds so the project could finally get moving. Dealing with local officials is difficult, to say the least, and despite our efforts the project was essentially frozen for some time.

Despite these difficulties, my work was fully utilized. I was assigned to begin the selection process of the 90 slums to receive project funds over the next four years. Also, being the only staff member with a background in biogas, I was responsible for exploring different design for the public toilets we were to build.

Many slum toilets and slum biogas projects have failed in India, including projects that are similar to the one I was working on with CHF. The failure of these systems was my major focus, and became the crux of many of my arguments. The city and many at CHF pushed for highly technical systems that pushed the limits of cost, while I argued for simple, community-based systems.

Many of us, including myself, define the broad goals of a development project as “promoting empowerment” or “fostering dignity.” These are certainly great goals, but the paths to achieve them are difficult. To do so, we are implementing a tangible solution, e.g. public toilets and biogas to bring sanitation, environmental health, and economic opportunities; however, we must ask ourselves – does this target the problems we are trying to solve?

In many ways, yes. Clean, usable toilets will certainly increase health and sanitation and will promote better livelihoods. But many projects fail to become sustainable or promote empowerment. What is the issue with these projects?

In my opinion, the issue is that simply installing these systems does not address the true goals of our projects. Our assumption that simple infrastructure will bring about these changes assumes that “toilets” are the only thing the underprivileged want. However, if we are targeting clean streets and health, what about the goals of empowerment mentioned earlier? Those were often postponed in the hope that we would solve them later. Toilets are a part of the process, but it is not the goal. The empowering aspect of a project like this is in the steps to get the toilets and biogas. A project that focuses on the process, and one that is led by the community, will help achieve our abstract goals as well as sustain our tangible ones.

In my argument for a simple system that would also lead to the empowering practices of community-based sanitation, I pushed to use a working model in Kenya. In Nairobi slums, a group called Umande Trust has been implementing public toilets connected to biogas digesters with high rates of success.

The blocks are brilliantly designed – simple, cheap, and constructed in a way that allows for personalization to the community needs. For example, a ground floor could have the toilets (with a digester underneath providing gas for lighting, cooking or heating water), the first floor could house the living quarters for the grounds keeper as well as a part-time doctor’s office, and then the second floor could be a student center with ping-pong table, gym equipment, and other facilities.

This design has become the leading idea in Pune, and will be pushed by the CHF staff in the future. I feel it can achieve the goals of working sanitation, as well as community participation. Our design will of course be different to cater to the Indian culture. For instance, a community kitchen wouldn’t work in India because kitchens are sacred places to each family. After discussing different concepts such as workout gyms, study centers, or game rooms seem to sit well with community members.

Unfortunately, much of the groundwork in Pune was suspended while waiting for funds. My program manager approached me about an opportunity to work with the other CHF office in Bangalore to implement a side project. The project had to be done quickly, and I was given a firm grip on the reigns. Thanks to his trust, I moved to Bangalore to implement a biogas project at Christ University (CU) with the goal of community outreach.

The project was a great experience, though it was often frustrating. With a project more or less in my hands, I was faced with the realities of implementing ideas while dealing with the realities on the ground. Working with the two other CHF staff, we would implement a biogas dissemination center at Christ University, as well as two working household-sized biogas digesters and a large 150 kg/day plant to supply gas to the canteen at the university.

The dissemination center would be the focus of the project. Admittedly, it wasn’t to the scale I had first envisioned. Our organization, as well as CU, wanted to explore a number of different designs, utilizing the money to implement different plants around Bangalore. However, we would only be able to implement a few systems in a short amount of time, which, in my opinion, would have certainly led to their failure as had been the case with so many other systems in India. The better option would be to implement a center where interested parties, businesses, and organizations could come to get information in one place, as well as see a couple working models – disseminating the technology, instead of giving it.

This idea became our outline. Over the next few months the staff and I designed an information center, implemented two small digesters to showcase a home-sized system (two to three kg/day), and implemented a large system on campus.

My past experiences leading up to this work in India prepared me to adapt to change, but I found myself having to do so on a much larger scale while volunteering in India. The realities of implementing these international projects is daunting at first, but it is necessary to realize what you can do and how. That is the biggest lesson from this experience. Facing moments when things were not going according to plan, you had to take a thorough look at yourself and what it is you can do to actively make changes. At times this can be humbling, at times exciting. It all depends on how you approach the problem.

I must thank Brian English at CHF headquarters for helping me set up this program; without his vision, my connection with this project would never have happened. The CHF staff in both Pune and Bangalore were incredibly warm and helpful. Due to their constant support, criticism, and pressure, I feel we were able to implement a sustained project in Bangalore as well as ignite a successful project in Pune. To my program manager Ranjit Ambastha, I give my biggest thanks. He put a lot of responsibility in my hands, listened to my ideas, and countered them when necessary to keep me on the right path to success.

And finally, I would like to thank the InterExchange Christianson Fellowship committee. Without these funds, my experience in India would have been severely postponed, and certainly shorter. With this grant, I was able to extend my stay in India to see the projects through to the end, and it gave me peace of mind, as I was able to handle my student loans back in the United States using my personal savings. I am certainly impressed with the openness and excitement I witnessed coming from Ms. Battle as I made my way through the selection process, and ultimately through the program.

To all I give my greatest thanks, it was a wonderful experience which has certainly pointed me down a confident path into the future. 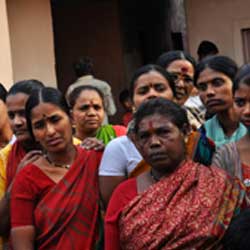 Mirno volunteered in India with the help of a Christianson Fellowship, from the InterExchange Foundation.