Working for Refugees in Ecuador

I am very thankful to have received the Christianson Fellowship to support my work at Asylum Access Ecuador over the past nine months. As a Leadership Associate, I have had a variety of responsibilities. I assist with volunteer programs by managing applications and visa documents as well as planning evaluations and trainings.

I have successfully managed the program over the past few months, which included being the point of contact for volunteers from the United States and Europe. I was able to ease their transition to Ecuador by completing a guide to living in Quito or any of our other provinces. I also worked directly with clients in reception by conducting intake and providing information about our services.

I was also a member of the Iniciativa Cartagena +30 project team. The goal of the project was to produce a document analyzing the current condition of refugee rights in Latin America in order to commemorate the 30th anniversary of the Cartagena Declaration. We conducted focus groups with refugees and asylum-seekers in Quito and in Tulcán, a city on the border with Colombia. We also interviewed 17 organizations from around the region, representing 13 countries. I led the focus group in Quito, as well as several interviews. After conducting the interviews and focus groups, we spent a few weeks analyzing them and consolidating information.

I wrote, edited, and translated significant portions of the document, including the section on the process of refugee status determination in the covered countries and the section on statelessness in Americas. I also conducted research on country policies and best practices as well as other topics that were included in our report. This project was the most significant aspect of the internship for me, both in time and content. I learned an incredible amount from speaking with refugees and organization leaders about difficulties that refugees face in adapting to the countries that receive them. I am confident that I am leaving Asylum Access with a robust understanding of the status of refugees in Ecuador and in Latin America as a whole.

I also worked to support the Global Asylum Access staff with operations issues, including document collection from our volunteers and staff and data collection for grant writing purposes. Those experiences gave me an insight into the day-to-day work of an international NGO and helped me develop skills in international communication, especially in order to explain cultural differences in professional expectations.

I coordinated between the Oakland office and the Ecuador office, which at times required clarification of how our office and/or the Ecuadorian ministry in charge of issuing work contracts function in order to give context to any problems or delays that the U.S. office perceived.

Throughout my time in Quito, I was under the supervision of Karina Sarmiento and worked with a team of Ecuadorian, American, Argentinean, and German volunteers and interns. Working directly in an international team also helped me to develop international understanding, as we commonly compared experiences and ideas.

Every aspect of my work at Asylum Access has required international understanding, both in the office environment with volunteers from countries all over Europe and coordinators from Ecuador, Spain, and Italy and in working directly with clients and researching refugee issues.

In my role as a member of the Cartagena +30 project team, I communicated with leaders of organizations from 13 different countries and learned about the challenges that refugees in those countries face. That project also fostered regional understanding and mutual respect between organizations and countries in Latin America, representing a united front from civil society in the effort to improve the conditions of refugees and asylum-seekers in the region.

I will return to the U.S. with significant experience in working in an intercultural environment, a deep understanding of Ecuadorian culture, robust knowledge of challenges for refugees and asylum-seekers in Ecuador and Latin America and a group of friends and former colleagues from at least 10 different countries. My international understanding and work experience have been significantly improved by this experience, and I am beyond grateful. Thank you! 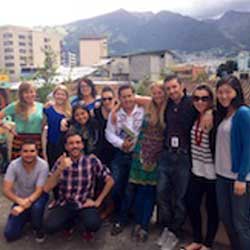 Elizabeth volunteered in Quito, Ecuador with the help of a Christianson Fellowship, from the InterExchange Foundation.