My name is Isaac. I am currently studying Biochemistry in Massachusetts, however I live in the San Francisco Bay Area. I am very interested in learning about the world and immersing myself in new cultures. I was particularly interested in going to Costa Rica because throughout my childhood, I had regularly heard stories from my grandparents about the country of El Salvador, where they had spent most of their lives. The thought of lush green mountains and tropical wildlife contrasted extremely with the dry rolling hills of California I was used to. In addition, the food and culture of the region of Central America is very close to my heart. Therefore, when my mom asked me if I would fancy a trip to Costa Rica, I responded with an immediate yes.

Our first stop along the trip was San José. There we visited the National Museum of Costa Rica. It was my first taste of colonial architecture, something certainly out of a different era.

Our second stop was a village outside of San José. Here we learned about some of the local organizations that are fighting to help villages in need such as the one we were in. This location was definitely mind opening, something that most tours of Costa Rica would seldom include.

One surprise during the trip was a pack of wild Coati by the road. As we stopped the van to take a closer look, I was afraid we would be attacked. These animals however, despite being wild, did not mind people taking a peek. Much more friendly than the local raccoons.

My first pineapple that was not seen at the grocery store.

The monolithic volcano was something out of a story book. It could be seen for miles in all directions. It felt like a metaphor, on paper, a volcano sounds scary, like Costa Rica may seem to a foreigner, but once I traveled to the volcano itself, it was pure beauty and rich with life.

As a child, I would bird watch in my backyard. Usually some finches and hummingbirds, along with the occasional woodpecker. This toucan brought me back to those days, as finding a wild toucan in San Francisco would have been like finding the holy grail.

A huge part of the trip for me was practicing my Spanish. I am conversational but not yet completely fluent. Luckily, our guide and driver were both huge sources of help in my path to fluency.

As they say in Costa Rica, “¡Pura Vida!” 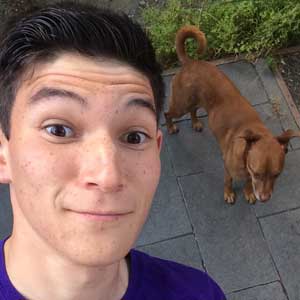 Isaac was a participant on our Sustainable Action Costa Rica program.