Take Me Out to the Ballgame— in Ocean City!

The event was jointly hosted by InterExchange, Aspire and Intrax. The group took a bus to Franklin P. Perdue stadium located in Salisbury, MD, where the Delmarva Shorebirds took on the Greensboro, Grasshoppers.

Before the game, participants were given a tutorial about the rules of baseball. Participants were also given the chance to practice the 7th inning stretch tradition of singing "take me out to the ball game." Upon arrival to the stadium, the group was met by a Shorebirds representative and then escorted to the group seating along the 3rd baseline, where Sherman the mascot greeted everyone with high-fives and the game announcer gave a special welcome to the group over the loudspeaker. 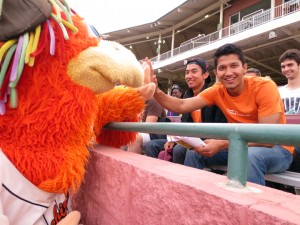 The Shorebirds lost 2-0, but participants had a great time having a very American baseball experience that included hot dogs, peanuts and cracker jacks! This was the first baseball game ever for all the participants present.