As a reluctantly hyphenated American - Mexican-American, to be precise - raised on both sides of the Mexico-U,S, border by a former cocinera (“cook”) mother and a carnicero (“butcher”) father, I grew up eating the most decadent and abundant amounts of meat of any other child I knew. Impromptu stops at any of the many local corner taquería stands were never surprising when grocery shopping in Tijuana, Mexico. By the time I was in my late teens—and already a decade of officially living across the border in San Diego—our trips to Tijuana had become mostly unapologetic international taco runs. My ultimate favorite were tacos de adobada (“marinated” - in this case, spicy marinated pork).

I would eventually learn that, in the southern Mexican states - specifically in Mexico City - these tacos de adobada are known as tacos al pastor (“shepherd’s style”), the only difference being that al pastor has pineapple in its recipe, and the adobada tacos do not. If there’s a comparison in the USA, it would be the different styles of pizzas and pizza crusts in New York City, Chicago, and California. Or, to pizza connoisseurs, the ongoing argument for or against pineapple belonging in a pizza.

When I was 24, I had to give up red meats for health concerns. Having eaten red meat as a part of almost every meal of my life, one of the greatest challenges of becoming vegetarian was visiting my mother and telling her I could no longer eat any of her meals. In my case, it was seen as more blasphemous than the time I confessed to being atheist when I was 13, or the time I came out as gay at 18.

Yet 6 years later - 11 months into a full vegan diet - on the eve of my cross-country move to New York City, my mother (realizing her baby boy was leaving) taught me many of her recipes, translated into vegan cuisine of course, including my favorite, tacos de adobada!

So, for this requested InterExchange Cooks post, I combined my mother’s recipe for vegan tacos de adobada, and I added pineapple in the marinade and into the fried protein to make these vegan Tacos Al Pastor.

Stem and seed all the dry chiles, then add them to a pot with just enough water to cover the chiles, and let them cook in high heat for 5 minutes. Turn off heat and let cool for at least 3 minutes. Then remove chiles from the water (save the water), put in a blender, add all other marinade ingredients, and blend until perfectly smooth. If the marinade is too thick and difficult to blend, add 1/4 cup (60 ml) of the chile water.

Have your protein of choice ready in a dish, pour marinade, and stir. Let sit and marinade in the refrigerator for about 2-3 hours, (any longer and the plant based protein will soften too much).

While your protein is marinating, prepare your creamy guacamole salsa!

Blacken tomatillos, onion, garlic, jalapenos on a pan, then put in blender and add all other ingredients. Blend until creamy smooth.

Once done marinating, using vegetable cooking oil, fry your marinated protein in medium heat, adding ½ medium white onion (finely sliced), ¼ cup (60 ml) of diced pineapple,1 teaspoon of oregano, and a ½ cup (120 ml) of the chile water. Stir until most of the sauce/liquid has evaporated/cooked into protein (about 15 minutes). Turn off heat and let sit for a few minutes while you prepare your taco fixins!

Finely slice up as many radishes and limes (into 4 slices) as needed, as well as cilantro (de-stemmed). Heat up your tortillas in a griddle (don’t let them get too hard).

Finally, add your “meat," squeeze a slice of lime, add your guac salsa and fixins, and enjoy!

Stay tuned for more in our InterExchange Cooks series! And, in the meantime, be sure to follow us on Instagram! 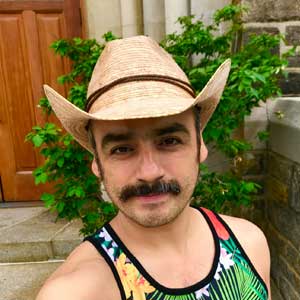 Daniel is a self-proclaimed “border brat”, having been raised on both sides the Mexico-US border. This unique upbringing helped him develop a wider lens of the world at large from an early age, but also a caused in him a cultural identity crisis. Daniel eventually overcame the pressure to culturally assimilate, and eventually embraced his Mexican heritage by learning and performing Mexican folk dance. He received his BA in Dance from the UCSD, and went on to create his own project-based modern dance group in NYC. Daniel continues to be active supporter of Mexican performance arts all throughout NYC, and has been happily serving at InterExchange as the Administrative Assistant.