Bienvenido a la Argentina: From First Holas to Hasta Luegos

On my way to Buenos Aires (BA), I did not know what to expect. I knew that my shy personality coupled with, what I considered to be, my modest language ability would not produce the kind of trip that I was hoping for. I decided to change this and become a little more open and confident- because of that, my first two days could not have been better.

On my overlay in Chile, I began talking to a women, named Claudia, who was also going to BA for work. She is of Chilean descent but typically works on film in Vancouver. I began speaking with her, first in English, then in broken Spanish, but always being commended for my Spanish speaking attempts. I am very glad I got to know her. Not only did I get great recommendations for places to visit in BA and learn a little bit about her interesting life, but I also was provided with her contact information just in case I ran into any trouble. Her exact words, which I found to be a little ironically amusing, were "I want your trip to be boring, without any spontaneity."  I was extremely appreciative and impressed by my first impression of the warm hospitality in Argentina.

After landing in Buenos Aires, I had my first encounter with what my travel guidebook calls  "amorous Argentinian men." A young man who worked in customs gave me a good couple laughs when I did not want to tell him where I was going to live. Each time he would ask me, I would reply with 'I am not sure yet,' and he would respond by telling me that I would live in his house, with him.

I stayed with Claudia up until I greeted an elderly smiling man who was holding up a sign with my name on it. Realizing that he was my driver that would take me to my host mom, I hugged Claudia and thanked her for her help, and proceeded to introduce myself to the man. I greeted him with a typical Argentinian greeting (two kisses on each cheek) and began speaking automatically in Spanish. He told me he was surprised I spoke Spanish because his notes said I was a beginner. I told him that I was eager to learn and that I was aiming to make this trip as non-English as I possibly could. Impressed with my goals, he began asking me the typical 'where are you from' and 'how was your flight' questions in Spanish. When he found out my parents were born in Poland and I speak Polish as well, he sang me a song that his great grandfather taught him from fighting in the Polish army during WWII.  As he continued to drive, I looked at the eclectic array of buildings that made up the city and I could not help but think how lucky I was to be here and meet the people I just met.

We arrived to Belgrano, a residential neighborhood of BA, and I was introduced to my host mom, an older lady, who opened the gate to her apartment for me. She greeted me and took me to the sixth floor, where she gave me a short tour of her apartment and led me to my room. I spent the time unpacking and finding the location of the apartment on the map that I had bought back home. With my terrible sense of direction, I decided to ask my host mom to point out for me where I could find my Spanish school AMAUTA, a church and some other places of interest. To my surprise she drew me a simplified map and suggested we take walk to find all these places. I spent the rest of the day walking with her around the neighborhood and talking to her a little about myself.

The next day was my first day at AMAUTA. I met many interesting people from Holland, Austria and other parts of the world (many of whom are beginners and are also participating in the 8-week program). Prior to starting our lessons, Kattie, from Austia , Felina, from Holland and I went to have lunch. I gave them some tips on how I get by with the Spanish I know. For example, I told them I love the verb poder (meaning to be able to) because if you conjugate it, all verbs preceding it are in the infinitive form.

Maybe its just me but I say "I can- yo puedo".. a lot throught the day. It was fun hearing about their travels and sharing mine. Since no student, this week, is at my language level, I got to enjoy private lessons for a shorter period of time. I look forward to getting to know the students and teachers more personally through the cultural activities that will be offered daily with AMAUTA.

I arrived to BA with so many ideas of what could go wrong. To my surprise none of them happened! Honestly the worst thing I can think of was the Chilean security taking away the scissors I brought with me (but it was my fault for putting them in my carry on)!  I met many interesting people in only two days. I am excited to see where the next 8 weeks will take me! HASTA LUEGO! 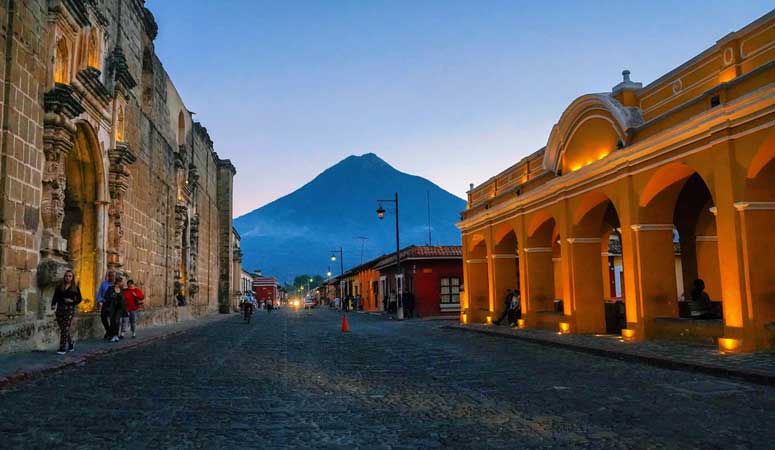 Living in Guatemala, you will have the opportunity to improve your language proficiency in leaps and bounds! You'll live with a host family in quaint La Antigua, and you'll get the chance to hike, surf, and explore!