Julia, a recent graduate from Amherst College, participated on InterExchange’s Teach English Thailand program. She shares her experience connecting with locals despite the language barrier.

I’m holding a thick rope in each of my hands, trying desperately to make it swing up and down. Sweat pours down my face, some of it stinging my eyes. A Thai man named Pond stands behind me, whacking me on the back with a blue foam pool noodle. He is shouting words that I don’t understand while a small crowd of people stands around, watching.

No, this is not a stress dream. This is the 90-minute Muay Thai class I (voluntarily) attend a couple times a week in Chiang Rai, Thailand where I teach English. Muay Thai is a martial art, similar to kickboxing, sometimes called “the art of eight limbs” because fists, elbows, knees, and shins are all used. I first learned about Muay Thai during a class at my program orientation, and I resolved to find a Muay Thai gym in my city.

One of the things I was most worried about before I came to Thailand was loneliness. Specifically, loneliness derived from the inability to communicate with people. And, to be perfectly honest, there have been times that I’ve felt lonely. I’m a very verbal person—I love to write and to talk—and not being able to speak Thai beyond your basic “hello,” “goodbye,” and “thank you,” can be isolating sometimes. But those times are almost entirely eclipsed by the moments of connection I’ve found here.

Muay Thai is one of the primary hubs of communication I’ve found. Only one of the four instructors speaks much English, and most of the other people in my classes are Thai and speak little to no English. I’m learning that there are so many more ways to communicate than speech.

When my classmates and I shadow box next to each other and our movements perfectly synchronize, when we chug water during breaks side-by-side, when we smile and groan and roll our eyes at each other after doing sets of fifty push-ups—all this is communication, just as authentic and fulfilling as speech.

During my first month in Thailand, I went to the Loi Krathong festival in Chiang Mai with my American co-worker, Jess. Loi Krathong takes place around the full moon during the 12th month of the Thai lunar calendar. During the festival, people make small rafts called krathongs out of bamboo and flowers and candles to light and float down the river, as a “thank you” to the river goddess and a sign of good luck for the New Year.

At the festival, Jess and I wandered down the street to the open square by the Three Kings Monument, where hundreds of paper lanterns hung on small wooden scaffolds, some flickering with light from the lit candles inside them. We watched as people placed candles in lanterns and on tables decorated with small boats and flags. We stood close to people passing out lit candles. We both took one and found an empty paper lantern. We took a moment to breathe, to think about the New Year, and then we placed the candles inside the lanterns.

As we left we passed a group of people, some sitting on boxes and some kneeling on small bamboo mats on the ground. Two young girls and two women who appeared to be the girls’ mother and grandmother had baskets of marigolds, bamboo discs, and long, thin pandan leaves strewn around them. They were showing people how to make krathongs. Jess and I knelt next to the mother and she passed us a leaf and showed us how to twist the leaves into intricate triangle shapes. I wasn’t very good at it, but she was patient, repeating the motions over and over on her own leaf until I got them. Half an hour later, Jess and I smiled at the group of women and left, each holding a krathong which we floated down the river on the night of the full moon in Chiang Rai.

Every day I experience moments of nonverbal or barely verbal communication. I’m trying to learn Thai, but the more I learn, the more I realize I don’t know. Mostly when I order food now, I get what I’ve ordered, and this in itself is a victory. There’s a woman across the street from my school who makes the best khao soi in town. Khao soi is a Northern Thai dish, chicken stewed in a curry sauce that is then mixed with coconut milk and served with egg noodles, pickled greens, and crispy noodles on top. Multiple times a week I eat lunch in her shop.

“Khao soi gai?” she says when I walk up.

I nod and smile and moments later she brings me a bowl of perfect soup which costs $1. Around the corner is another store, run by a woman who knows how to cook every Thai dish I’ve ever heard of. My favorite thing to order there is crispy pork noodle soup.

This feels like Muay Thai, like the Loi Krathong festival. It’s in these small, daily encounters that I find connection—when sipping the warm, delicious broth at my favorite restaurant (which I can order without saying a word), when playing UNO with my students during a break time while they chat in Thai and laugh and dance around me, and when I’m going for runs in the park by my apartment and the people I pass nod, smile, give me an encouraging thumbs up.

I was worried about being lonely in Thailand, prepared to learn about solitude. Instead, I have learned more than I could have imagined about communication and about the varied, beautiful forms that connection can take. 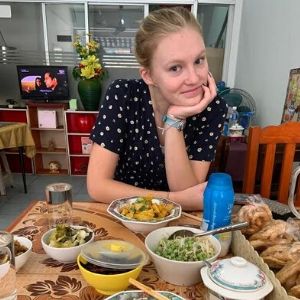