10 Things You Didn't Know About Ireland

Ireland and the United States share a deep cultural bond: after all, nine of the original signers of the Declaration of Independence were Irish-American and the world’s first St. Patrick’s Day Parade was held in New York City.

Over the last decade, InterExchange has proudly hosted thousands of Irish citizens on Work & Travel programs in the U.S. And we’re excited to announce the latest addition to our Working Abroad programs for Americans: Work & Travel Ireland. Freedom-loving travelers seeking a working holiday experience can work and travel in Ireland for the summer, or for up to a full year. Do more than just kiss the Blarney Stone; fall in love with the culture and the legendary landscape of the Emerald Isle.

And if you need more reasons to see why Irish eyes are always smiling, we’re sharing ten facts you might not have known about Ireland:

1 - The Irish drink of choice isn’t a Guinness - it’s tea! The average Irish person drinks 1,184 cups of tea a year, making Ireland the biggest tea-consuming nation per capita. Lyons and Barry's are the teas of choice. Don’t be surprised if you’re offered a ‘cuppa’ when you visit the homes of your new Irish friends!

2 - Dublin boasts one pub for every 100 people. Its oldest pub, The Brazen Head, dates back to 1198 and was frequented by literary luminaries James Joyce and Jonathan Swift. The storied pub also hosts crowd-drawing storytelling nights, where you can experience the matchless, interactive art of Irish seanchai.

3 - Halloween traces its origins back to the Gaelic festival of Samhain, a harvest festival held on October 31st to mark the end of summer. Londonderry’s Banks of the Foyle Halloween Carnival is the oldest Halloween celebration in Ireland, as well the country’s largest street party.

4 - Hate snakes? You (and maybe Indiana Jones) can rest easy, because you won’t find any in Ireland. Because of its geographic isolation from mainland Europe, Ireland lacks snakes, moles, weasels, polecats, and other species commonly found in Europe. You will, however, find over three million sheep, so pick up a wool sweater while you’re in Ireland.

5 - You may already know that hurling and Gaelic football are the traditional sports of Ireland, but you might not realize those traditions date back to the Bronze Age. Hurling was the core sport at the Tailteann Games, held in County Meath two thousand years ago. Check out a hurling match while you’re in Ireland!

6 - Move over, San Fran. Ireland may not have mission burritos, but they do have tech companies. Ireland is one of the largest exporters of software in the world, and 25% of Europe’s computers are made in Ireland.

9 - Have you ever bought duty-free items at the airport? You can thank the Irish for that. The very first duty-free shop opened in 1947 at Shannon Airport to serve passengers on transatlantic layovers. Most North American-European flights at that time all stopped in Shannon to refuel.

10 - Over 80 million people of Irish descent live outside Ireland; 14 times more than the population of Ireland itself. Almost 40 million of those descendants live in the United States. If you’re one of those Irish-American descendants, you share the second most common ancestry among Americans! (If you were wondering, German is the most common.)

Visit our Work & Travel Ireland program page to find out how you can embark on your own adventure through friendly, beautiful Ireland! 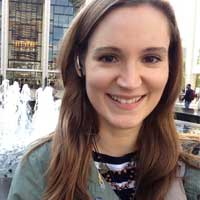 Teresa joined InterExchange in 2016 as its Communications Manager and loves using her multiplatform storytelling experience to create content viewers want to connect with. Teresa is a native New Yorker and an avid traveler who has spent time trekking through Western China, Morocco, and Iceland.