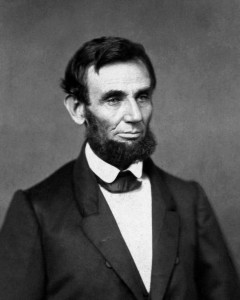 In honor of Presidents’ Day (a holiday honoring Abraham Lincoln and George Washington’s birthdays) we’ve been thinking about Abraham Lincoln, the 16th President of the United States. During his time in office, he oversaw the American Civil War, abolished slavery and fundamentally changed the role of the federal government in American life and politics.

Lincoln was one of the most famous and influential presidents in American history. He had a history of arguing against slavery even before he was a senator and lost his second senate race because of his outspoken opposition to the expansion of slavery into the western territories in public debates held before the election.

When he was elected president, seven southern slave states seceded from the union to form the Confederate States of America before he had even officially taken office. The government of the United States did not recognize the newly formed country and declared it illegal. The Civil War began on April 12, 1860 and became the bloodiest war in American history. The nation split in two with eleven states and a handful of territories ultimately joining the confederacy.

On January 1, 1863 Lincoln used his powers as commander in chief of the armed forces to issue the Emancipation Proclamation, freeing all slaves in the rebel states of the confederacy. Because this was not a law passed in congress, but a proclamation made as a part of a war strategy, only 3 million of the 4 million slaves in the United States and its territories were legally freed by this proclamation. Many of those were not freed in reality as they were living in confederate territory. However, this encouraged many to escape as longstanding laws which required the return of runaway slaves to their masters were overturned. The remainder of the slaves were freed by states’ laws or through the ratification of the 13th Amendment to the constitution.

On November 19, 1863 he gave one of the most famous (and one of the shortest) speeches in American History, The Gettysburg Address. It was only months after Union forces had triumphed over the Confederacy and the country was still torn apart. His speech focused on the unity of the United States and equality for all as guaranteed in the constitution.

Abraham Lincoln was a lawyer and used his knowledge of the law to greatly expand the reach of presidential authority. He also turned one of the foundational ideas of American government on it’s head through abolition of the slaves. Before the Civil War, states had been the most powerful political entities. Due to the founding fathers’ fear of powerful federal governments, they had set up a system in which people’s rights were thought to be protected by the states against the excesses of a tyrannical federal state. After the Civil War, in which millions of slaves had been given rights directly by the federal government against the wishes of many states, the opposite became true.

He then became the first American president to be assassinated. Lincoln was shot by John Wilkes Booth, an actor and confederate spy, in Ford’s Theatre in Washington, D.C on April 14, 1865. He was shot in the back of the head at point blank range, fell quickly into a coma and died at 7:22 on the morning of April 15, 1965.

He was famously born in a one room log cabin in Kentucky, and several years later the family moved to Indiana. Lincoln claimed that wide-spread slavery in Kentucky was one of the reasons for the move, though his father also had difficulties with a land-deed title. Several years after that, they moved to Illinois another non-slave state. This is where he met and married his wife, Mary Todd Lincoln, fought with the state militia, practiced law and entered politics. He was first elected to the Illinois House of Representatives, then the U.S. House of Representatives, the Senate, then the presidency, all as a citizen of Illinois. He spent his last several years living in the capital until he was assassinated in 1865, six days after the slave states surrendered to end the Civil War.

Abraham Lincoln was born February 12, 1809, two years after the British Slave Trade Act, which abolished the trade, though not the practice itself. The slavery/abolition debate would heat up again in the 1830s, when he began practicing law and politics and only become louder and more controversial throughout his career. There were only 32 states and some territories when Lincoln was elected and each one had its own debate over slavery. It was a politically volatile time and Lincoln turned out to be the right man to steer the country through near collapse.

During the first half of the 19th Century, slavery was one of the main issues of contention between two camps, the Republicans (anti-slavery) and the Democrats (pro-slavery). Although Lincoln did not agree with many in the abolitionist camp, he also did not support slavery. The historian Eric Foner argued that Lincoln found himself a moderate in the Republican party between radical abolitionists who believed slavery was fundamentally against God’s laws and conservative republicans who were also against slavery, but only because they believed that it hurt whites. Foner believes that his speeches and writings indicate that he was against slavery because it did not align with the republican principle of equality for all.